Working for our client, Marks Barfields Architects, the Dorton Group has been contracted to clear Brighton’s West Pier site, making way for the i360 project, which incorporates an exciting and innovative observation pod structure. 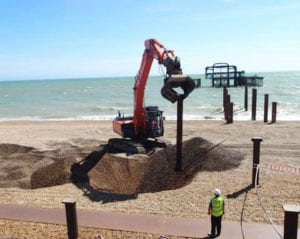 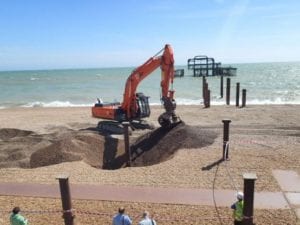 Our client is Marks Barfields Architects, the designer of i360, and the company behind the capital’s hugely successful London Eye. At 162 metres high, and with an observation pod rising to 138 metres, the i360 will be Britain’s highest observation tower outside London – taller even than the London Eye.

We aim to recycle 95% of salvage from the site, with the majority being taken to Dorton Reclamation Yard in Burgess Hill.

We have begun work to clear the remains of the pier’s root deck and the contents of the underlying arches. We aim to recycle 95% of salvage from the site, with the majority being taken to Dorton Reclamation Yard in Burgess Hill. The site has a wealth of historic and decorative items, which are part of the legacy of the West Pier and so should be preserved.

One of the most challenging aspects of the clearance so far has been removing the columns from the beach. These were originally installed with the use of steam engines, and remarkably are at a depth of 16m. We have used our state of the art machinery to remove these columns and extract the piles below the root deck.

The main funding for the renovation of the West Pier site is from Brighton and Hove City Council, and the project also has the backing of English Heritage, who “welcome a project which would provide an outstanding feature on the seafront and a worthy companion to any successor to the West Pier, whether rebuilt or replaced.” The project is expected to cost a total of £35 million; this includes the restoration of a number of the historic promenade buildings, as well as an exhibition that will showcase the long history of the pier.