As part of the ongoing development works within the port area DDE (SW) Ltd were favoured with instruction from Associated British Ports to demolish the former IT and Arrivals/Departure building at Millbay Docks.

The buildings involved bordered the line between public and secure areas of the port and DDE (SW) Ltd worked closely with the port security officers to maintain security, with 70m of new security fencing being installed by completion of the site works.

A major fibre optic junction box close to the building could not be isolated and was protected throughout during the works. 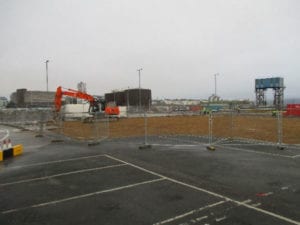 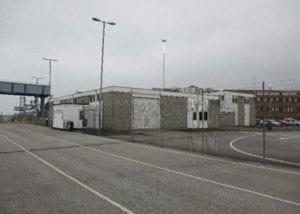 Works started in late November and worked to a schedule to allow completion by the start of the pre Xmas ferry operations, with all works being completed in a little under 4 weeks.

By careful planning of the works the site team were also able to remove sections of the building to allow installation of temporary toilet and shower units necessary for the continued operation of the commercial freight element of the port.

Floor slabs and foundation concrete were removed with all materials being separated into appropriate waste streams. Timber and metals were sorted and recycled, general waste was hauled to a local waste transfer station for further processing and all hard core and concrete material was transferred to Dorton Groups recycling yard at Lee Mill for processing and future reuse in the construction and agricultural industries.

Future works by the client will involve additional drainage, lighting and CCTV provision. On completion of the demolition works the area was left graded over and consolidated with machine tracks providing a clear site for incoming contractors.

“We engaged Dorton’s to demolish a building on our estate. In addition to the physical works we also asked them to obtain all the necessary permissions and manage the project. Throughout we found them easy to work with, flexible and efficient, the project was delivered on time and on budget. We would not hesitate to use them again for similar work.”