Royal Oak Farm is situated in the hamlet of Clanville about 1½ miles from the centre of the small and attractive market town of Castle Cary. Adjacent to Royal Oak Farm is a single storey agricultural building (a large barn) and a paddock of just under two acres, which contains a recently planted mixed fruit orchard and an attractive pond.

Firefighters from across Surrey and Sussex were called to battle a large barn fire on Wednesday night (7th September 2016). A spokeswoman for West Sussex Fire and Rescue Service said no-one was injured during the incident and that no animals were inside the barn at the time of the fire. However, the blaze caused extensive damage to the building.

Dorton Demolition were awarded the contract to demolish the barn and carry out an environmental clean to surrounding fields and paddocks, removing fire damaged asbestos cement fragments. The barn building was clad entirely in asbestos cement corrugated sheeting. The barn structure was demolished mechanically in a controlled manner with all materials separated into their perspective groups, loaded into suitable containers/ skips and transported off site to be disposed at licensed tipping and recycling facilities. 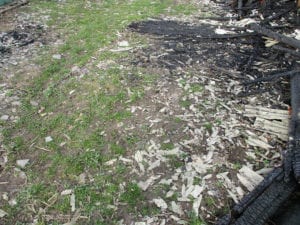 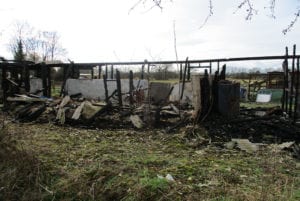 The project was completed on time with no incidents or injuries recorded.