Dorton Demolition & Excavation Limited (Dde) was awarded this contract through competitive tendering. The works involved the demolition of the Music, Physics and Prep Blocks, 3 Rugby Fives courts* and link bridge to the rear of the college, inclusive of asbestos removal and the removal of ground floor slabs and foundations. Then the interim development of the areas to include temporary soft landscaping, planting and temporary asphalt surfacing. 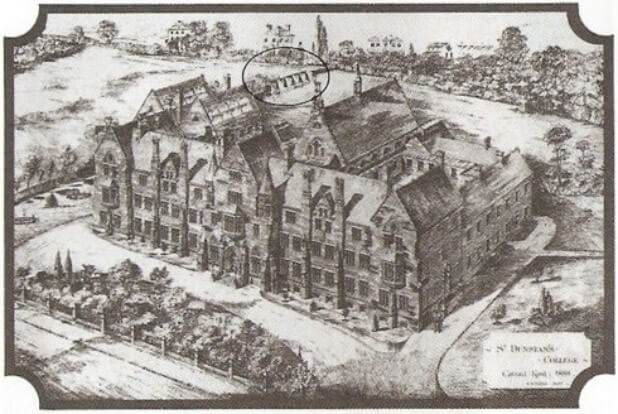 The 3 Rugby Fives courts in 2021 sandwiched between the 2-storey Prep Block and 3-storey Physics Block. The original three-walled courts have been replaced with a modern four-walled variety built as a memorial to the first Headmaster – Charles Stuart (1888-1922) 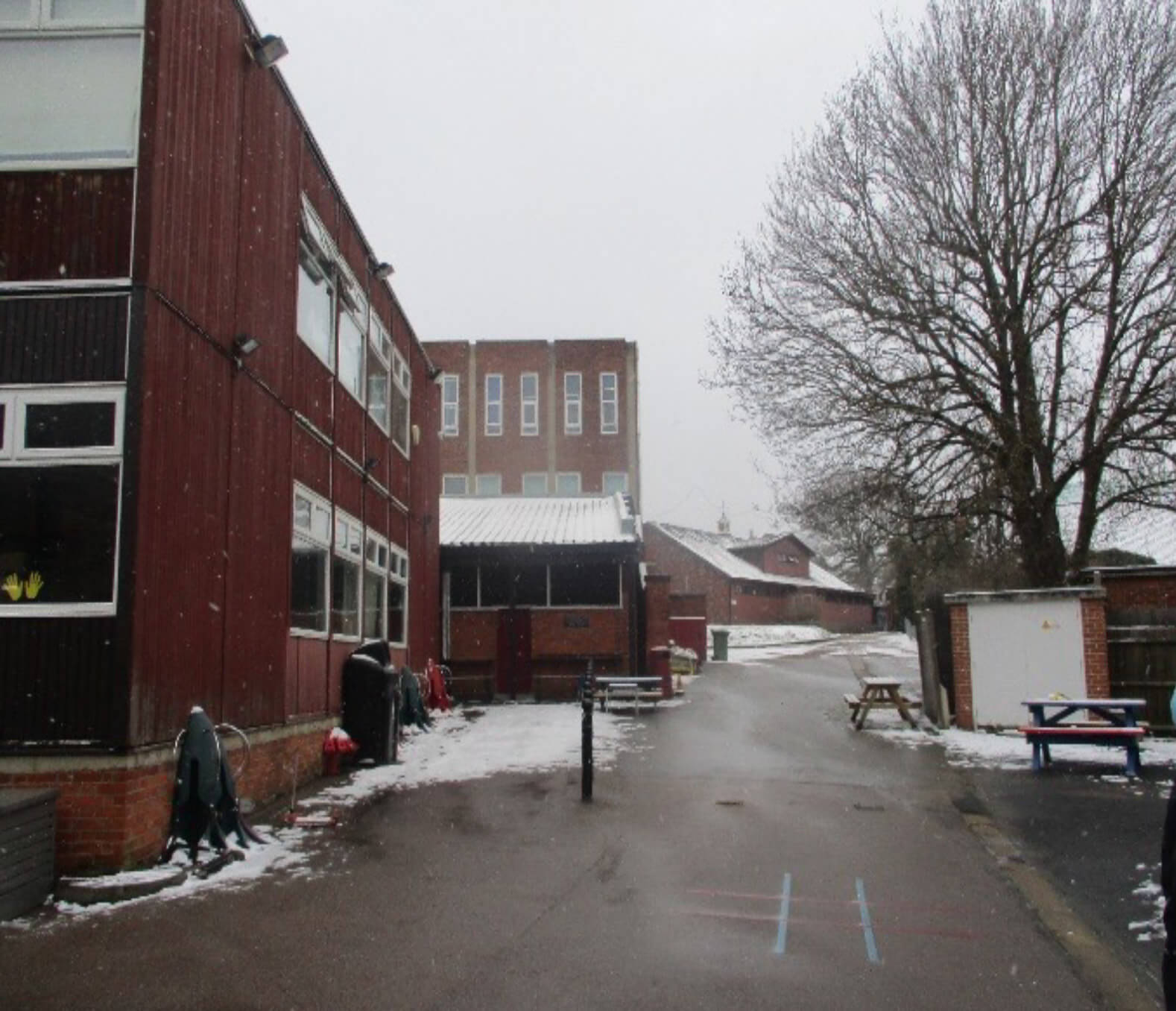 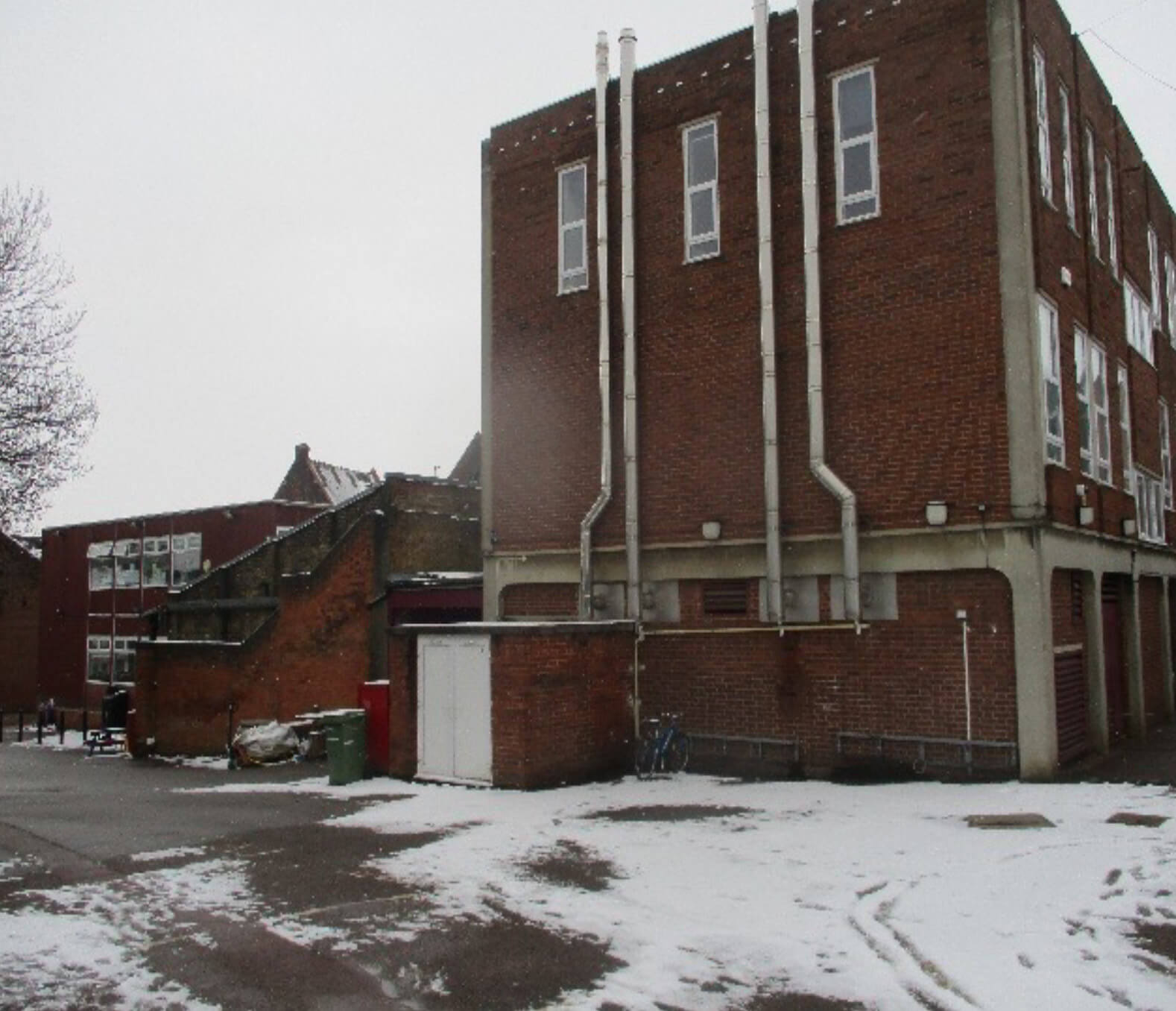 The demolition works package will form part of St. Dunstan’s College’s wider plan to significantly redevelop the site – which has stood since their foundation in 1888 – and rationalise their existing site into a new world-class facility. St. Dunstan’s College is an established (one of the first schools in the world to have invested in science and technology laboratories) and prestigious co-educational independent day school (The College has been named as the Independent Co-ed School of the Year at the Independent Schools of the Year 2020 Awards and the Junior School was nominated for Prep School of the Year at the prestigious Independent Schools of the Year Awards 2021) in Catford, south-east London.

Google Earth image – Demolition area, demarcated in a red pathway, is to be transformed into the proposed new Parade Square 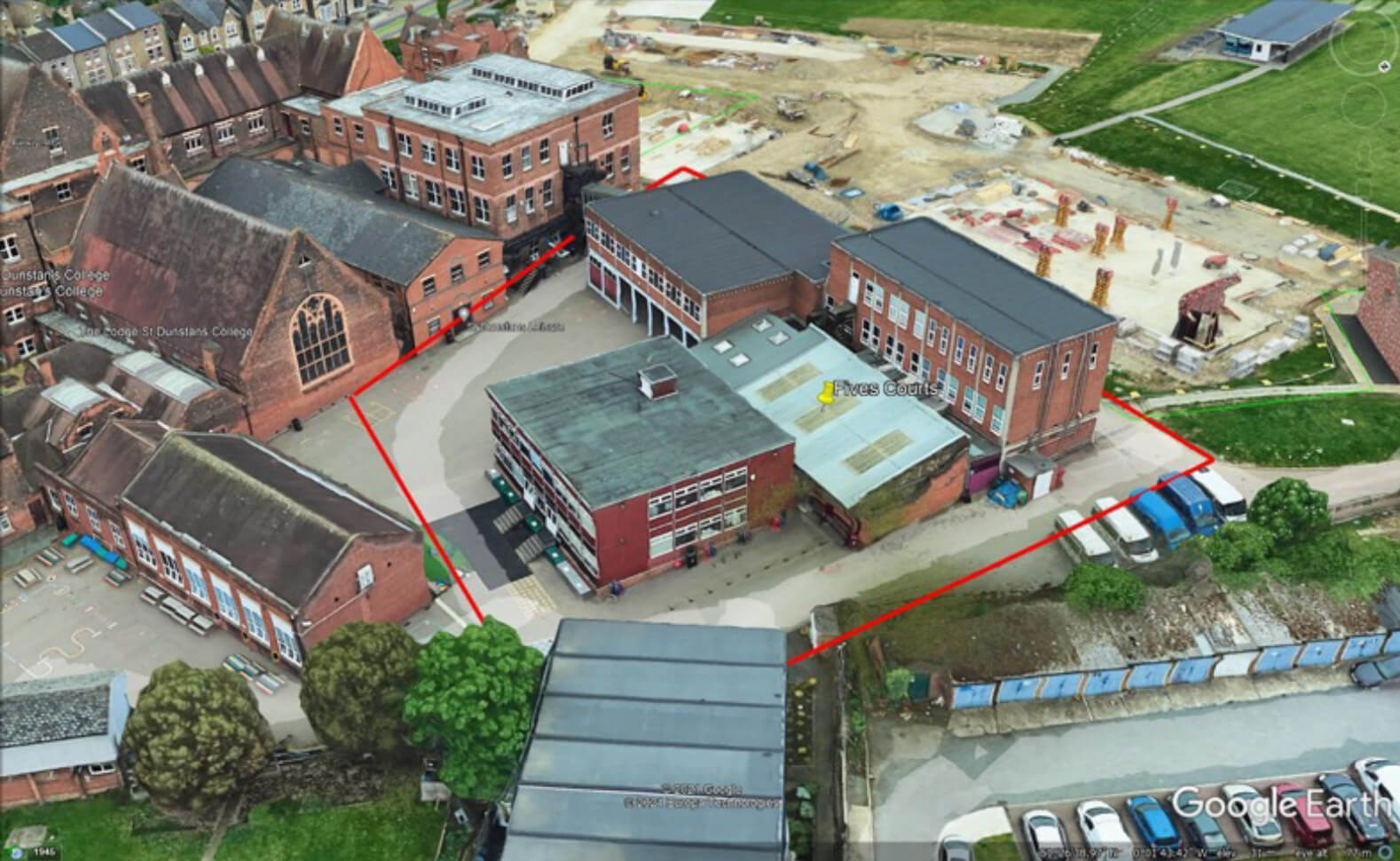 Surrounding land-use to the north, north-east, south and west of the College is predominantly residential terraced dwellings, 2-3 storeys in scale. The outer commercial premises of Catford town centre are located in close proximity to the east. Two railway lines run more or less north-south to the east of the main school site where Catford and Catford Bridge stations are located.

Brief scope of the enabling works:

1. Dde completed an external schedule of conditions of adjacent retained roads, footpaths, boundary fences, and buildings prior to commencement of works.

2. Protection measures were taken by Dde to maintain the integrity of retained hardstanding and features including undercroft concrete steps and school playground markings, and to manhole covers and the like. 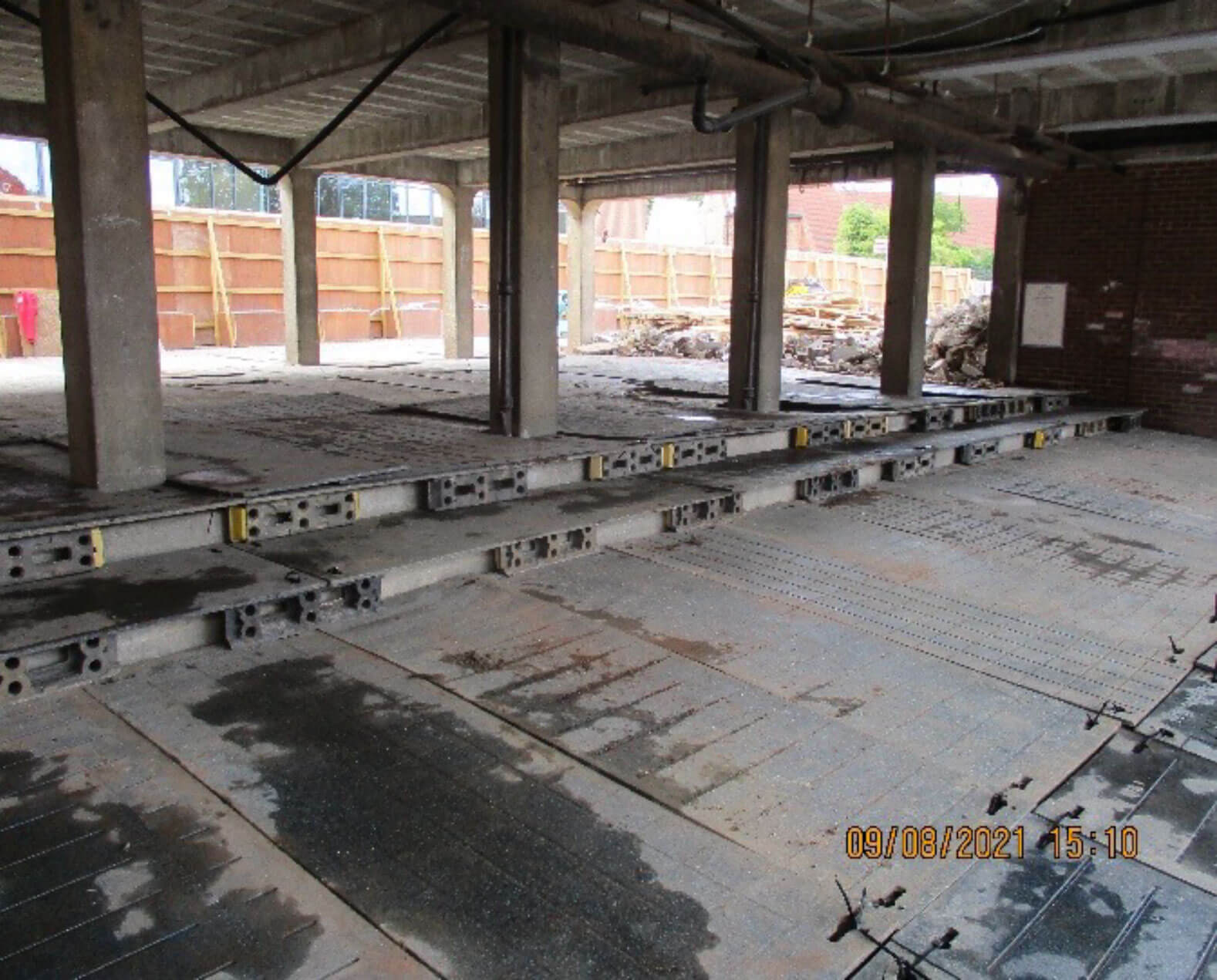 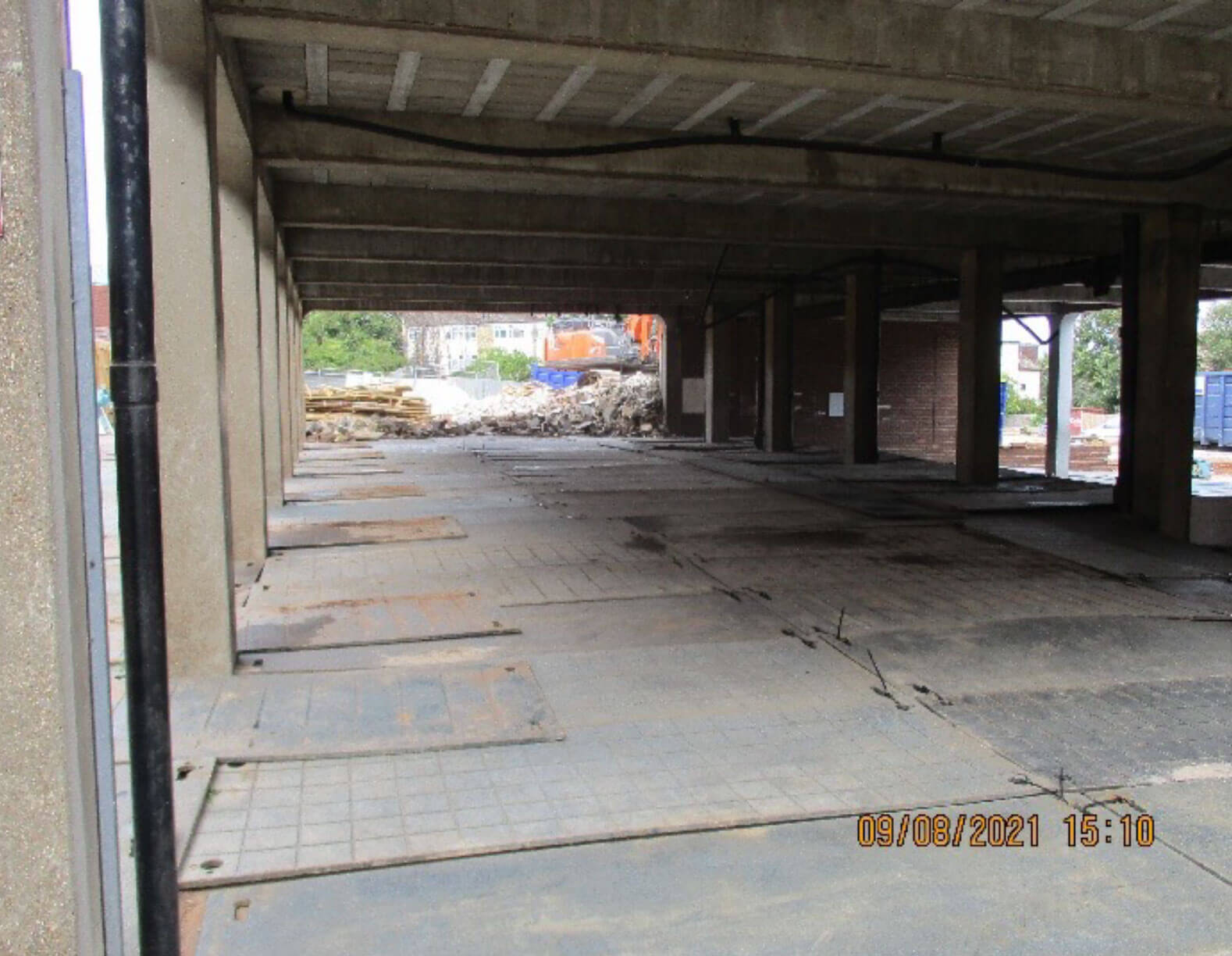 3. Dde undertook a site survey to determine location of underground services. A live sewer running across the site was identified and protected.

4. Disconnection of existing services inclusive of electricity, gas, water, telecoms and other live or obsolete installations by Dde. The college was responsible to isolate Data and CCTV cabling and systems. The tracing and identification of cabling was carried out by Dde’s inhouse electrical engineer.

5. To negate disturbance to the school traffic during term time, Dde were not permitted to use the existing main entrance at the front of the school. Instead, permission was obtained to form a temporary site traffic route and site compound area at the rear of the school. This was a redundant area which formerly housed some temporary school classroom buildings. 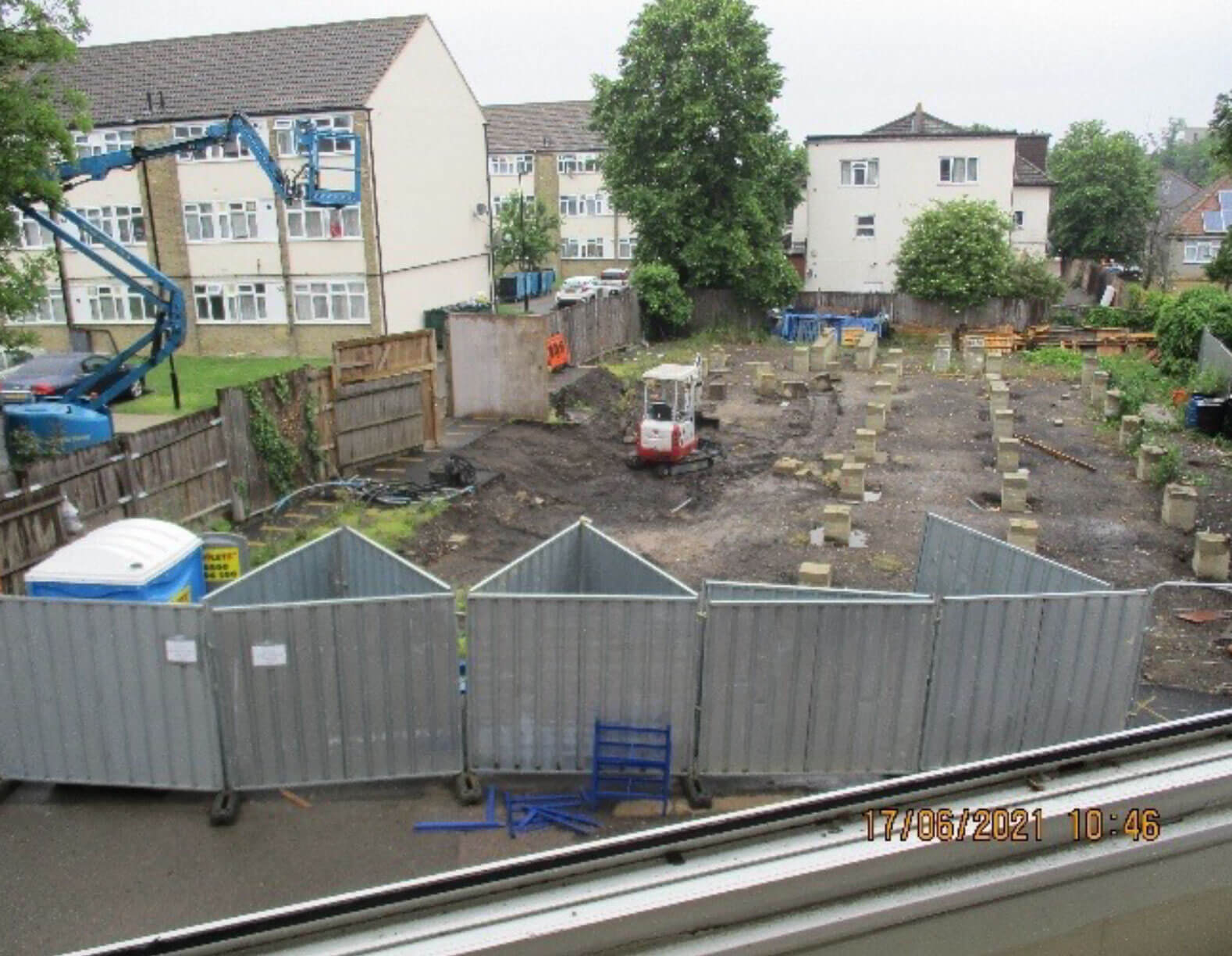 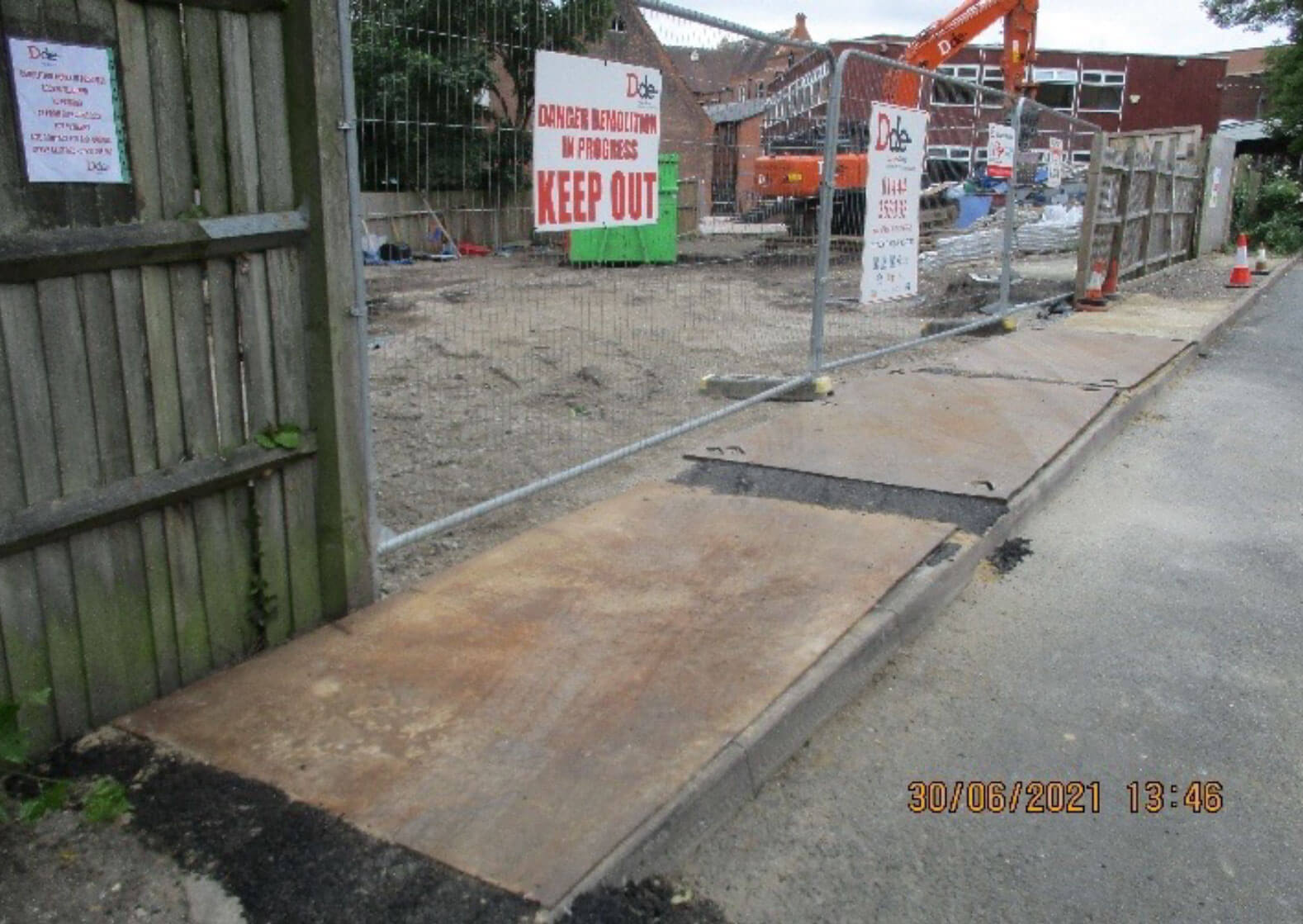 6. Dde designed, supplied and erected temporary timber ‘freestanding hoarding’ to site boundaries to maintain the integrity of the existing hardstanding. 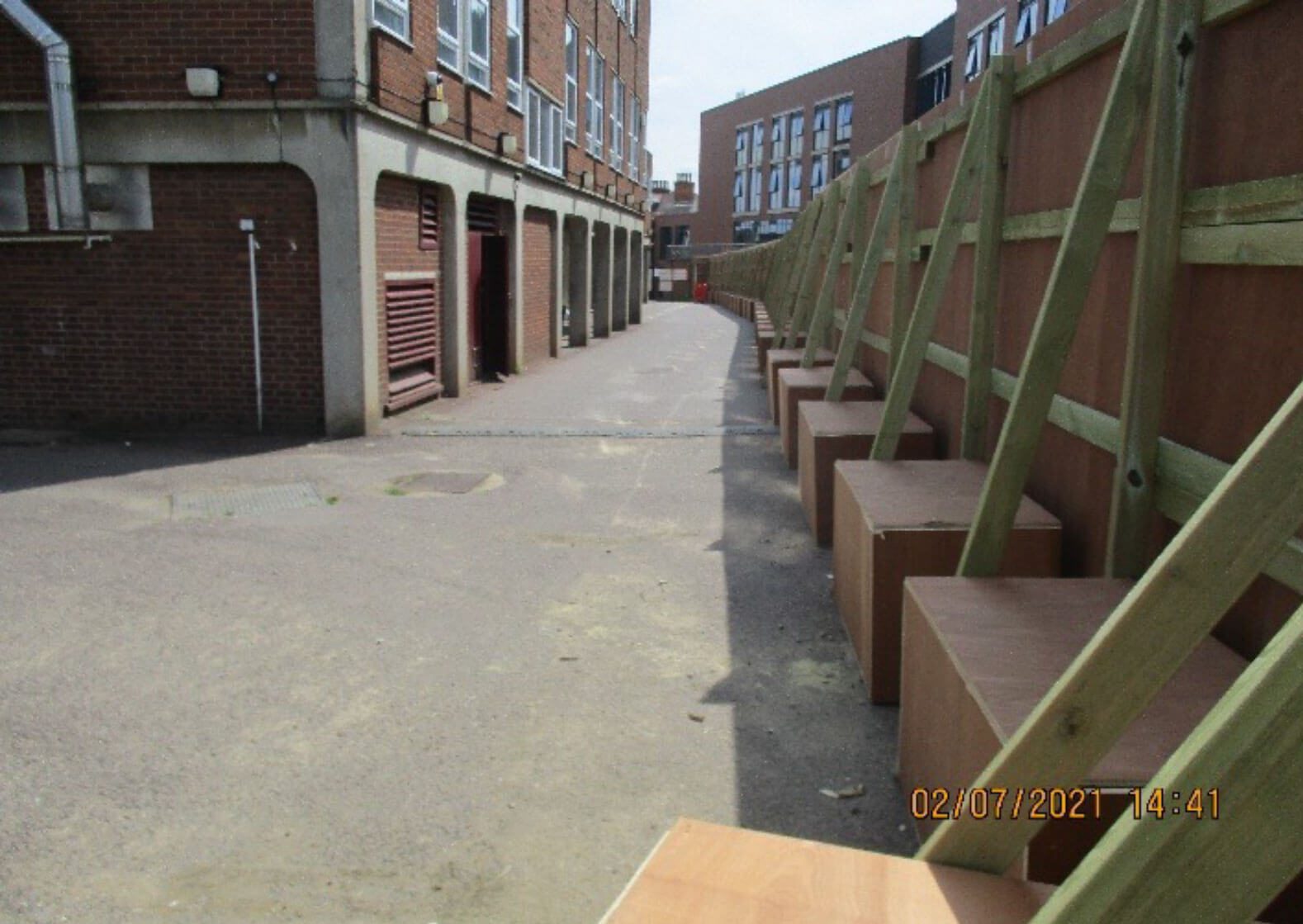 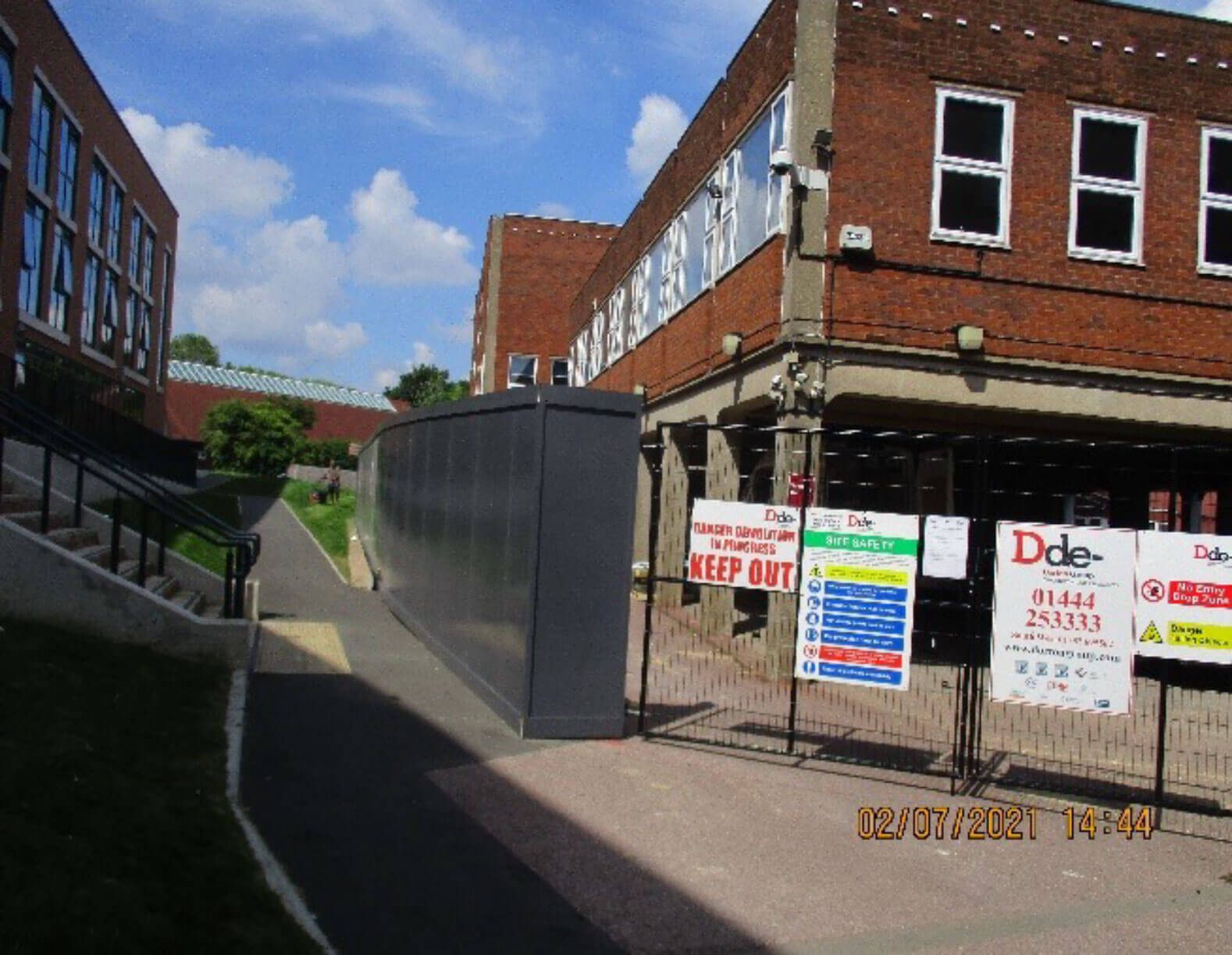 8. Dde took all necessary precautions to prevent nuisance from excessive noise, exhaust fumes, dust, unsightly rubbish, and other causes so that functions and events planned within the school, continued to operate uninterrupted throughout the duration of the project.

9. All buildings and structures within the demolition site boundary were fully soft stripped and then demolished to existing ground levels.

10. Ground bearing floor slabs and foundations were broken out down to 300mm below existing surrounding site levels.

11. Waste demolition arisings were systematically and progressively removed from site.

12. Dde graded the entire site on completion to follow existing contours of the land. Contours were left smooth and flowing where possible with falls for adequate drainage. Some concrete arisings were crushed on site and the aggregate utilised in backfilling voids and excavations as necessary. Excess aggregates were cleared away and the site left ready for surface finishes of asphalt and planting.

13. A large portion of the footprint of the demolition area was to be turfed. Dde imported approximately 200m3 of subsoil and an equal amount of topsoil made up of well decomposed manure and rotted leaves to improve moisture retention under the lawn. 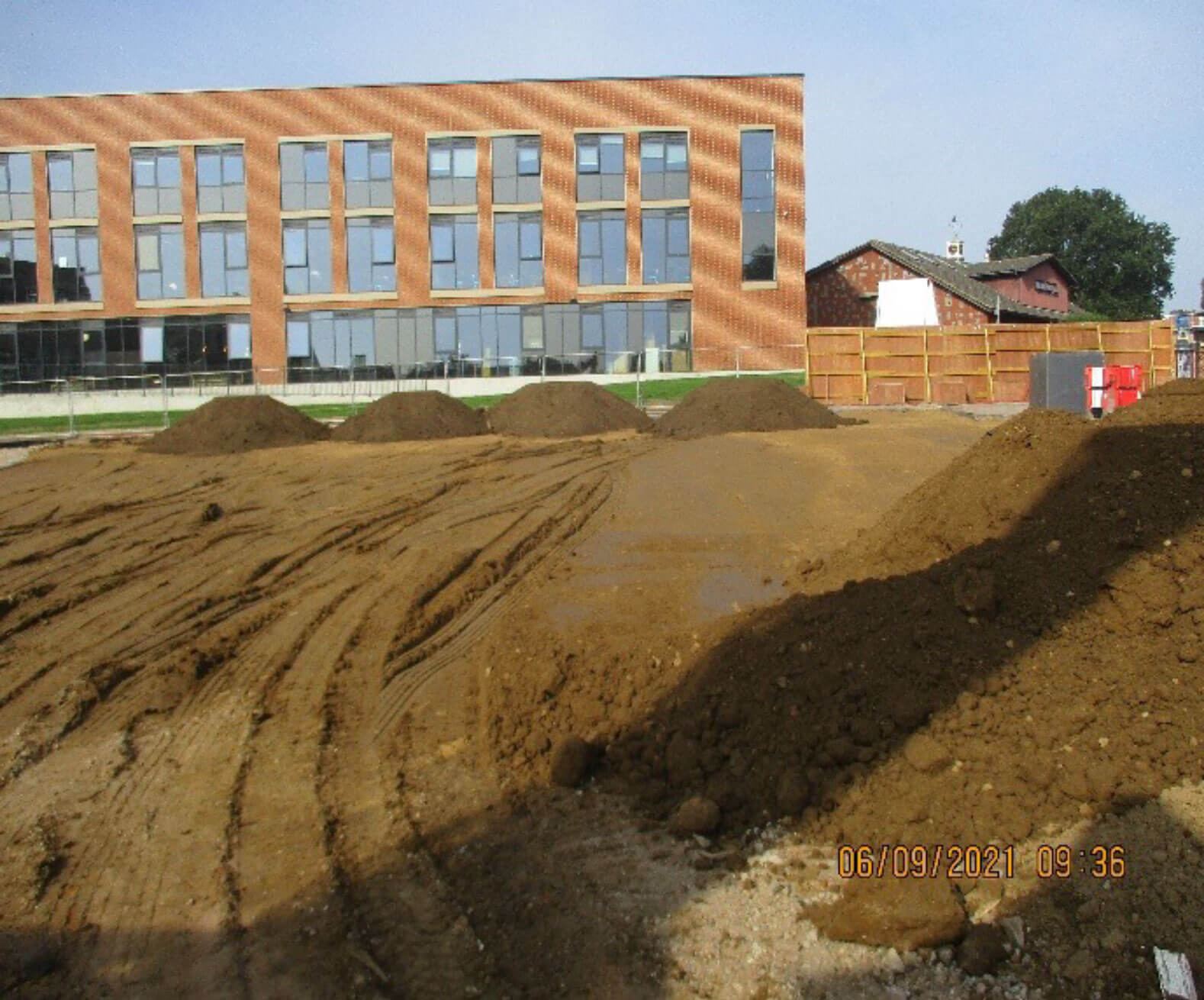 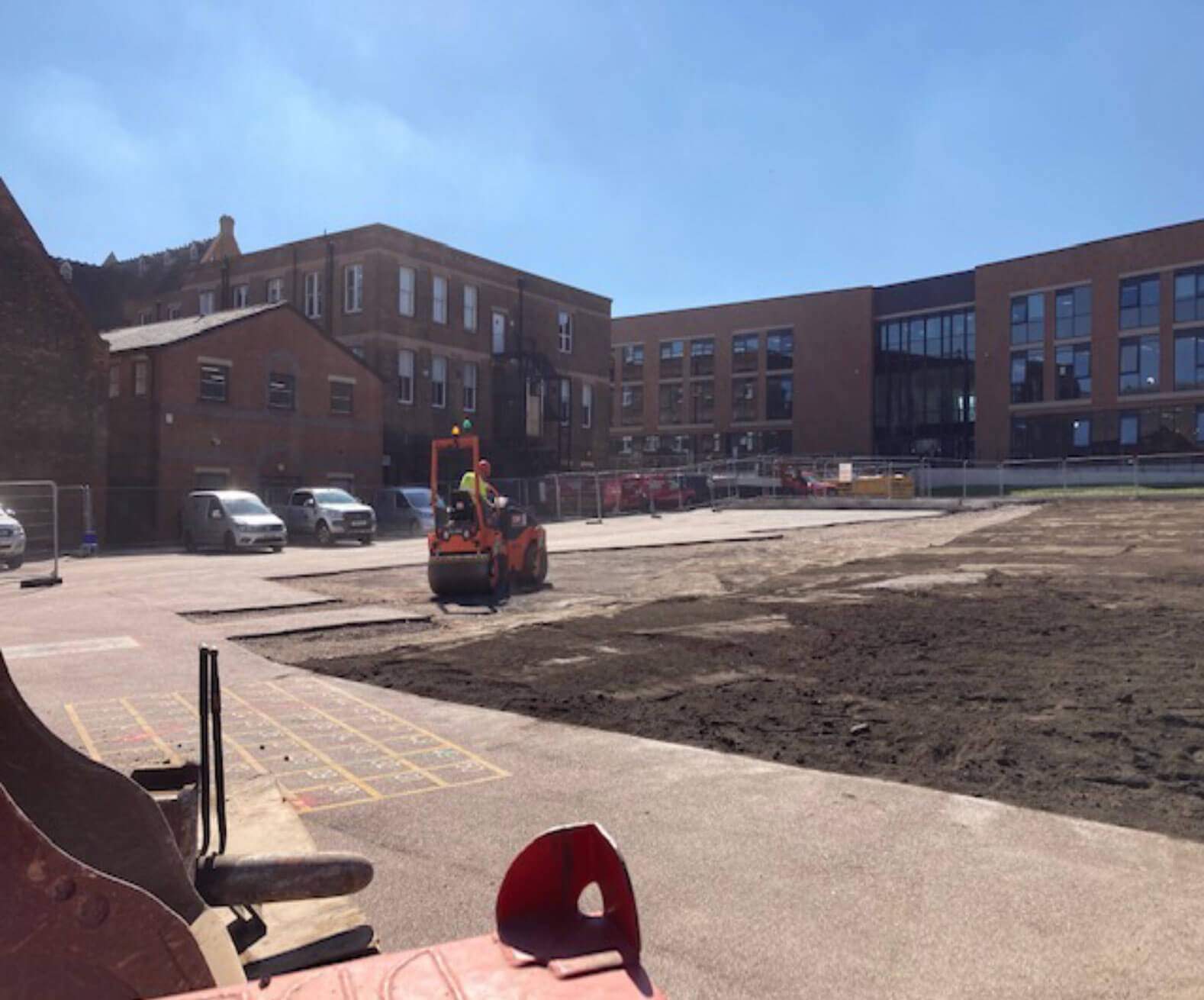 14. Good quality seeded turf was brought to site and laid by our inhouse team. 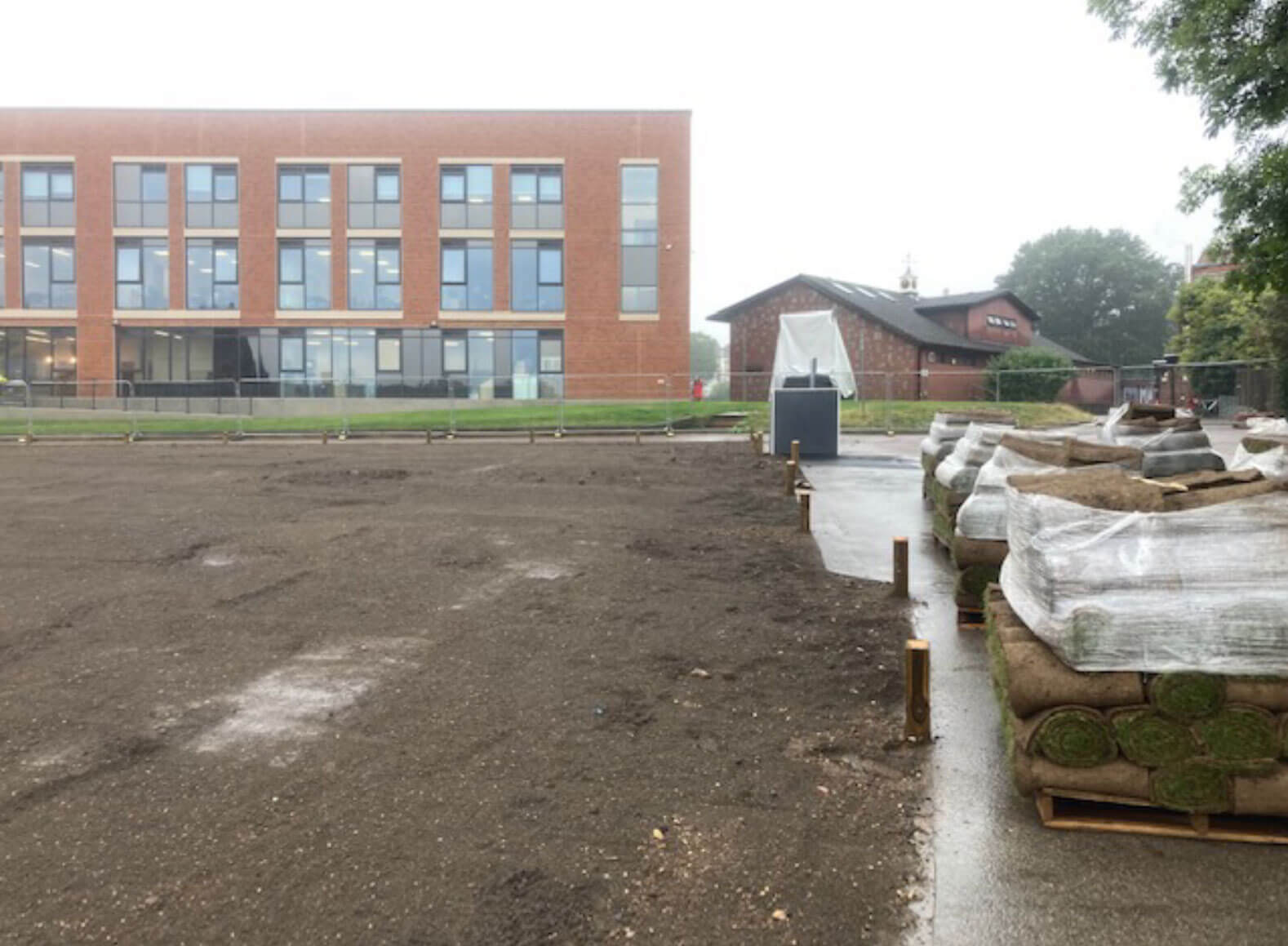 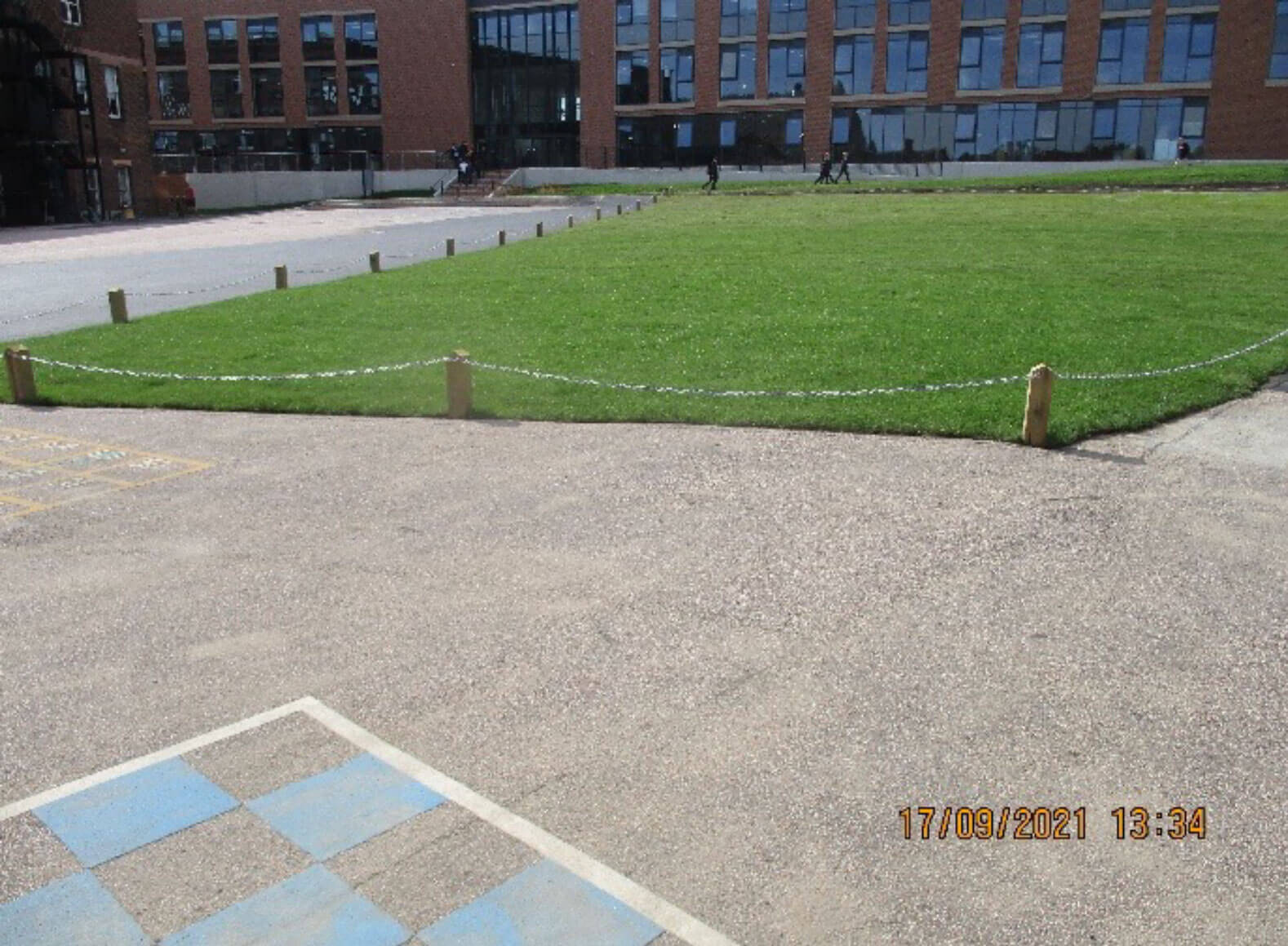 15. All remaining affected areas where buildings had been removed or existing hardstanding disturbed were prepared and laid in new temporary asphalt, feathering-in new tarmac finish to tie in with existing and follow existing contours of the land. 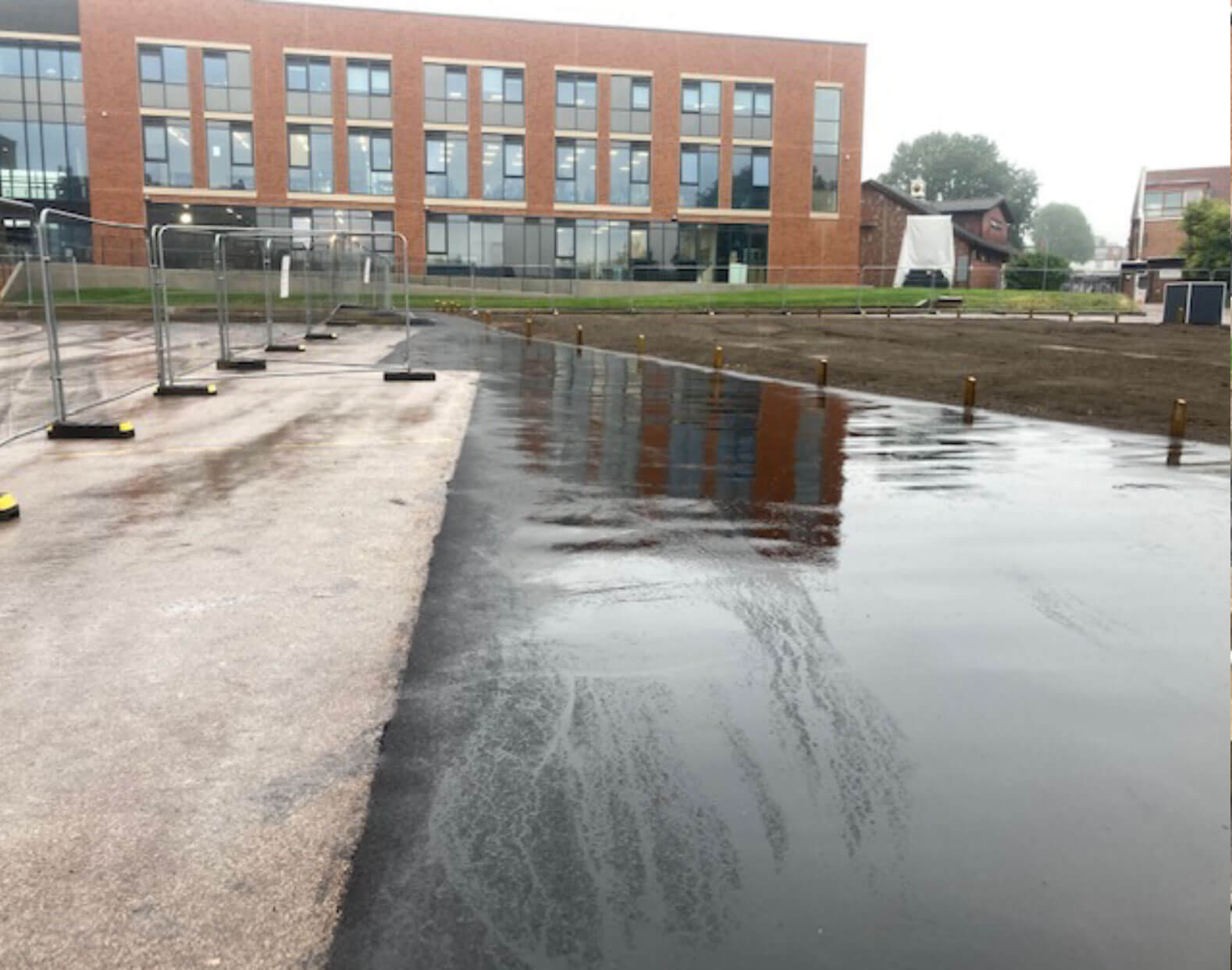 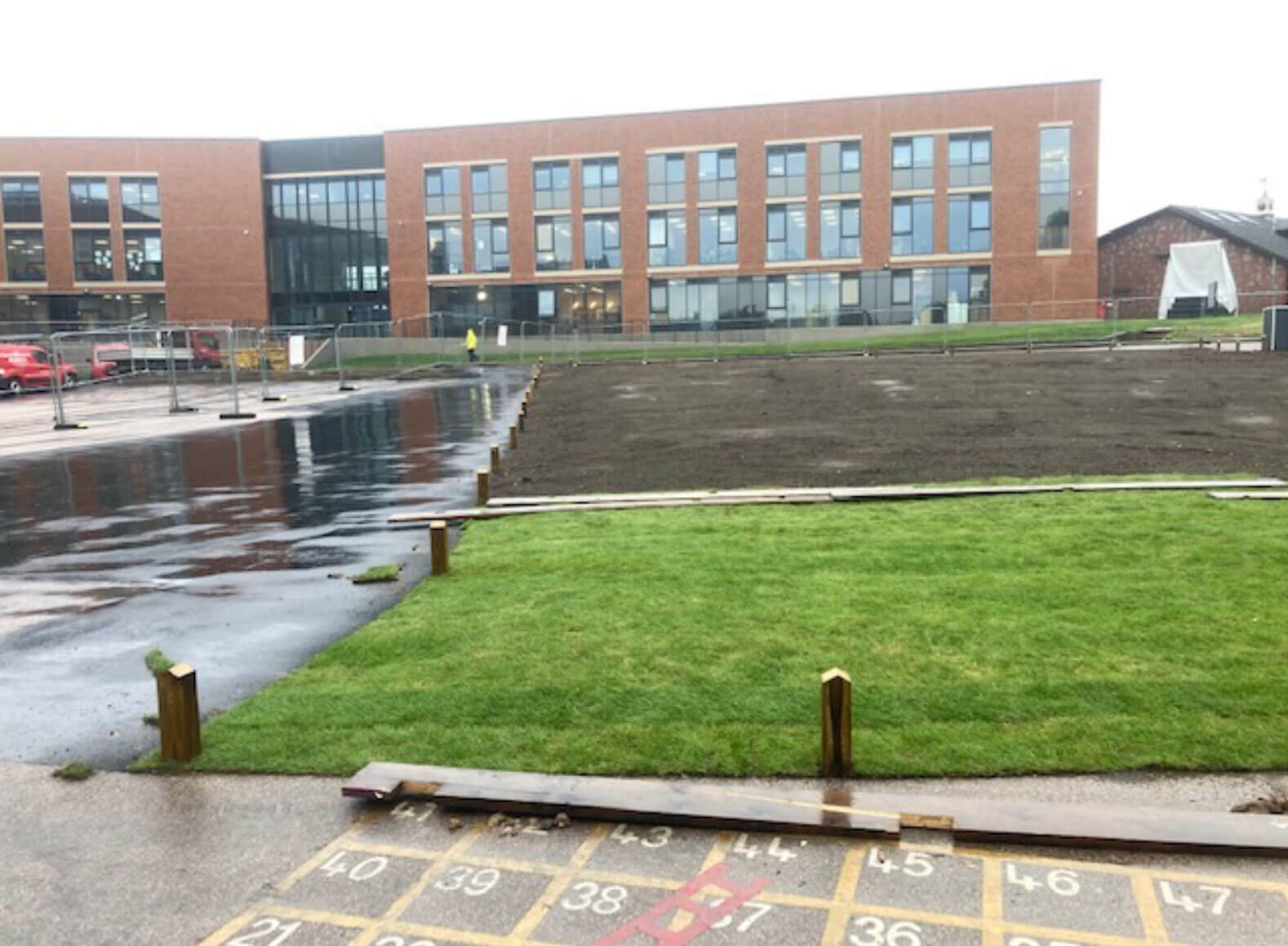 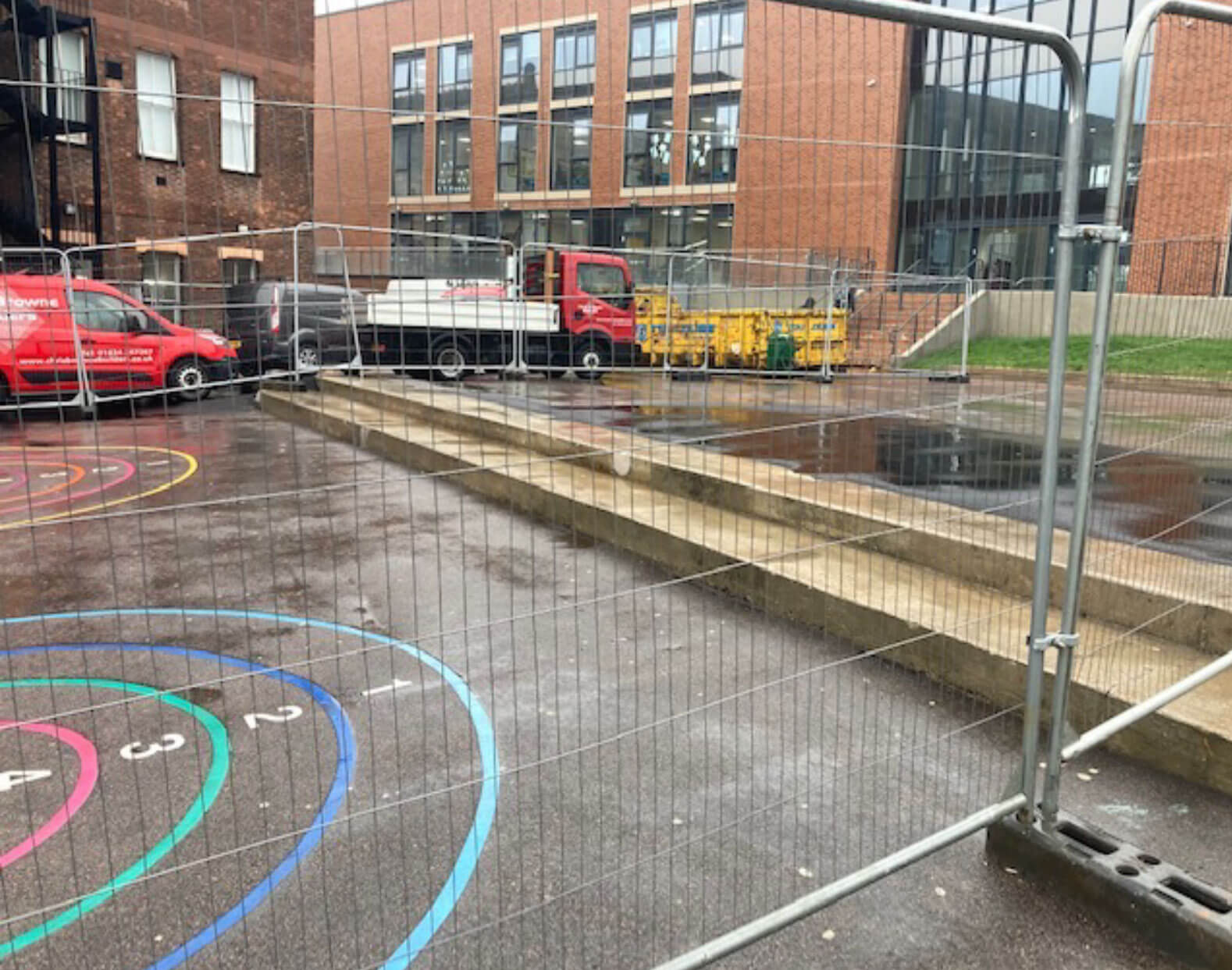 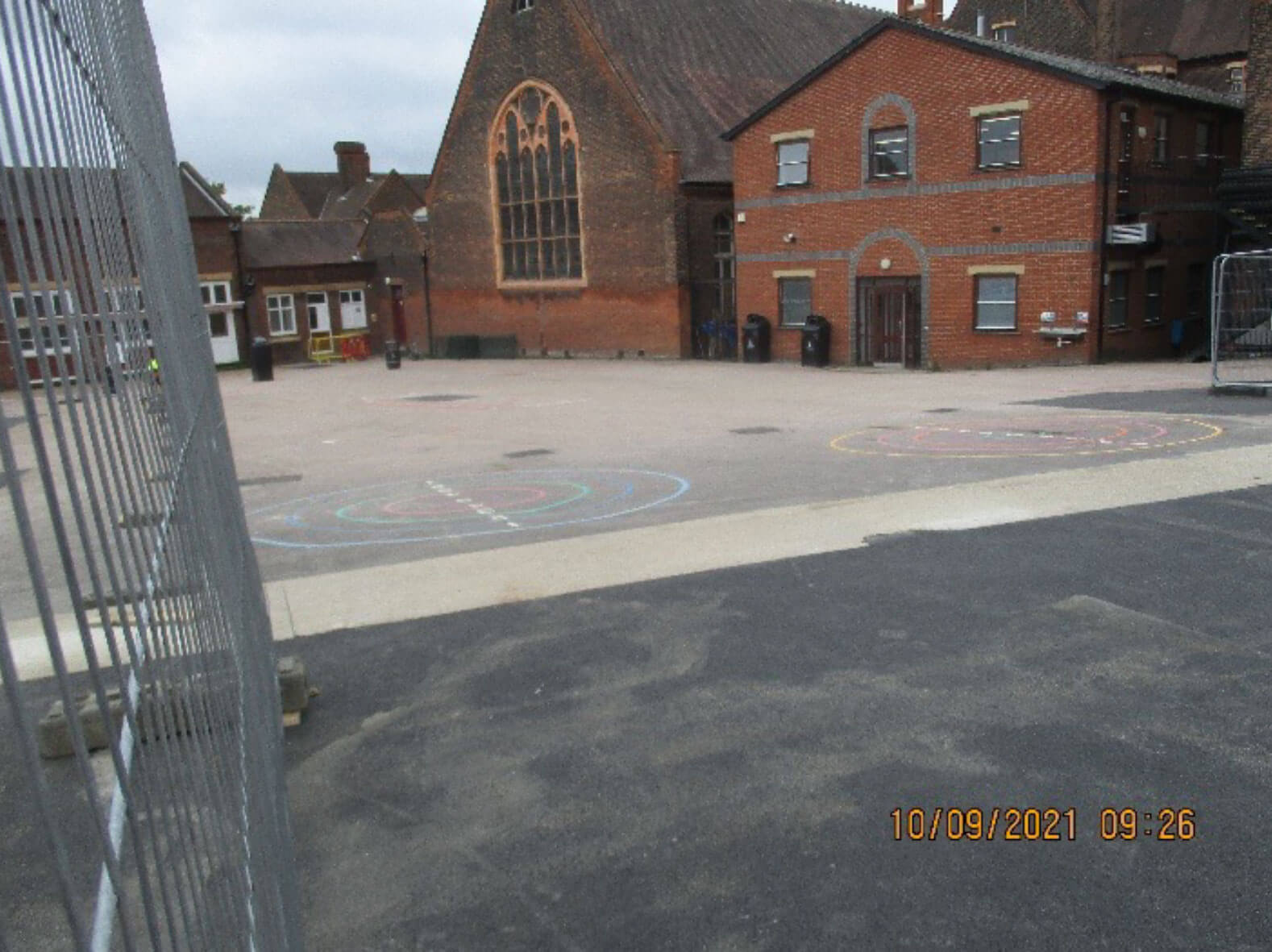 Demolition followed a precise sequence systematically reducing the buildings top-down working along each bay ensuring that stability was maintained in the remaining structure.  As work progressed across the site the materials arising were segregated and loaded away for recycling or disposal. 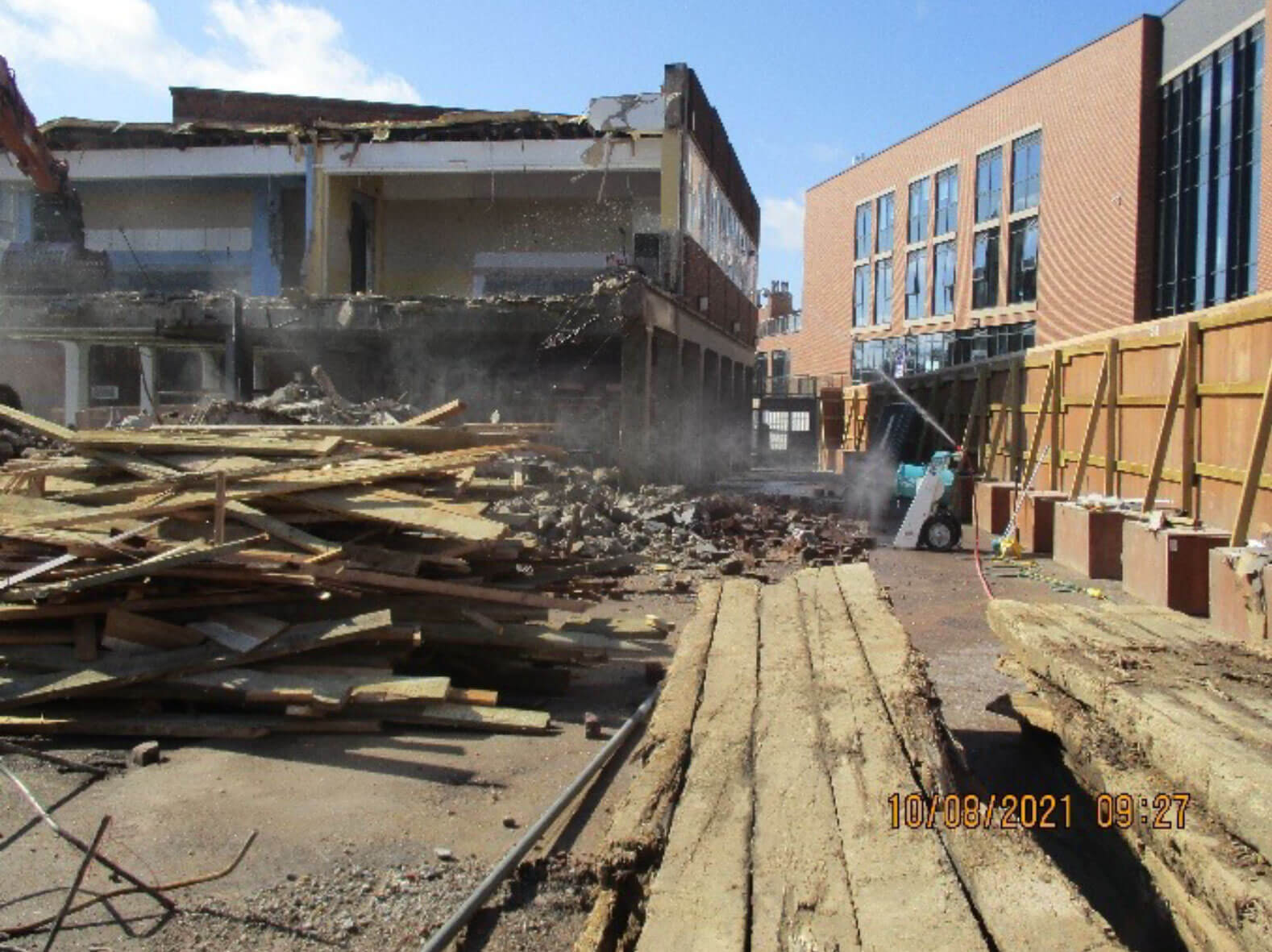 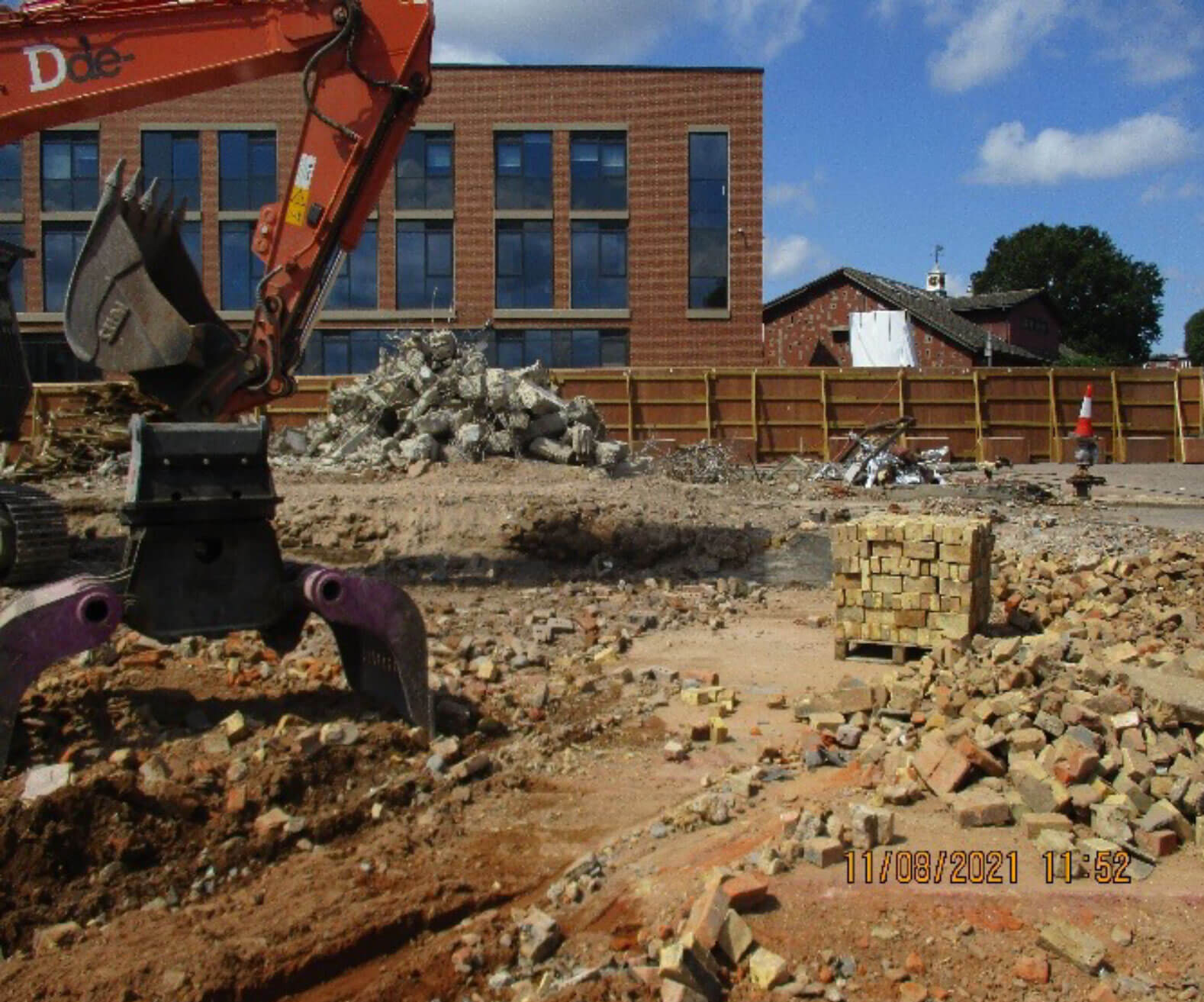 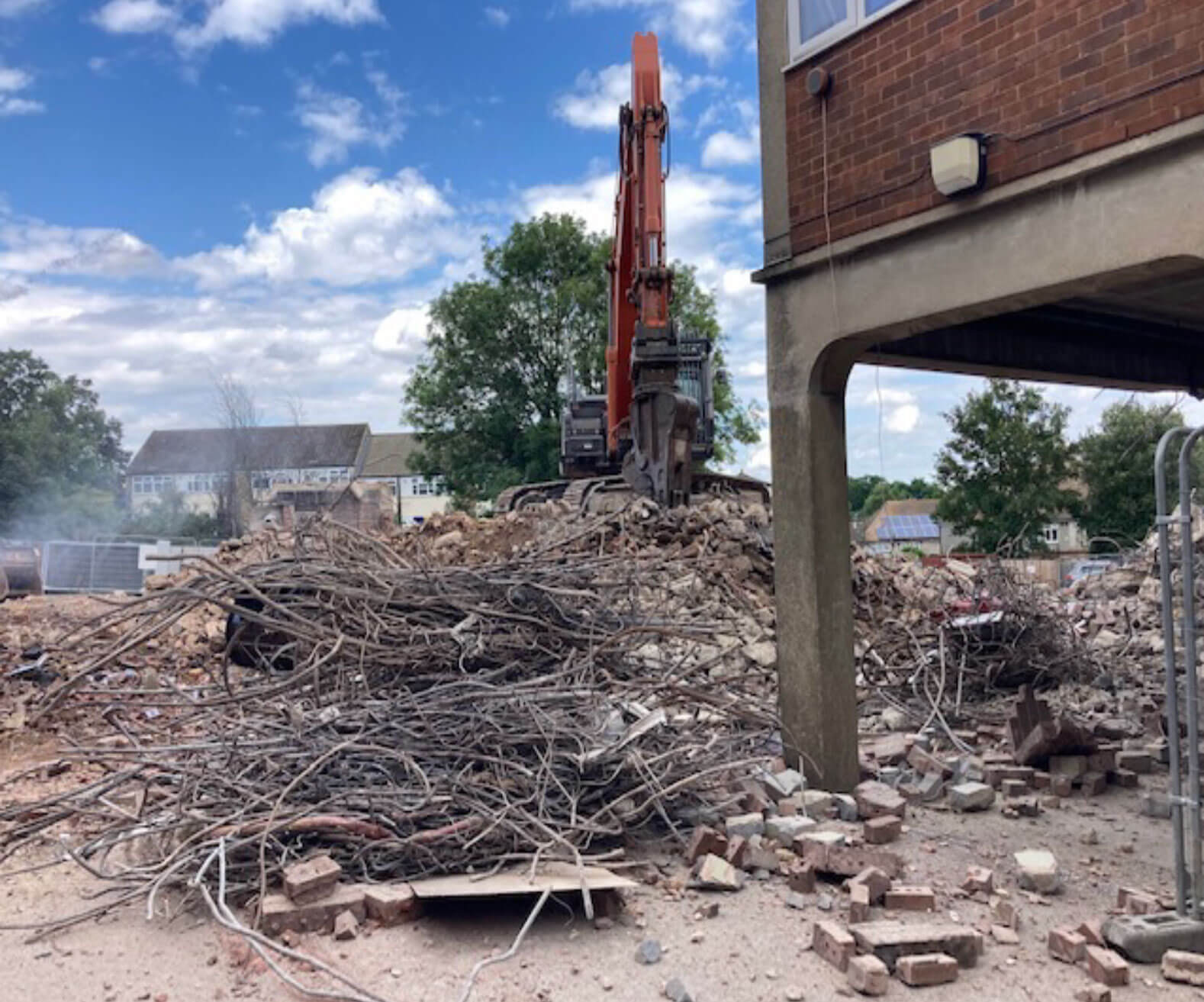 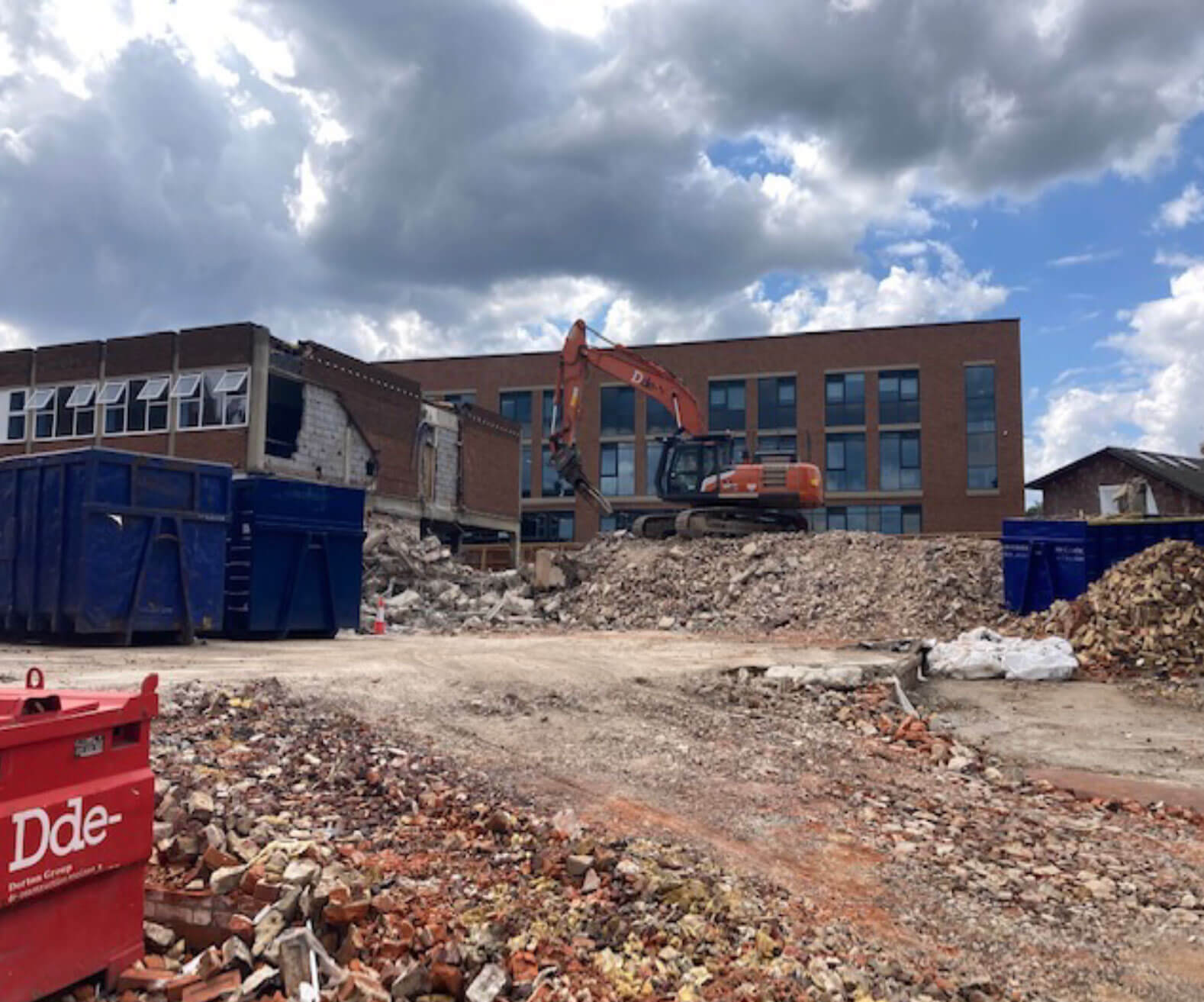 A demolition scaffold was erected to the link bridge to prevent collapse of structure into the adjoining retained building. 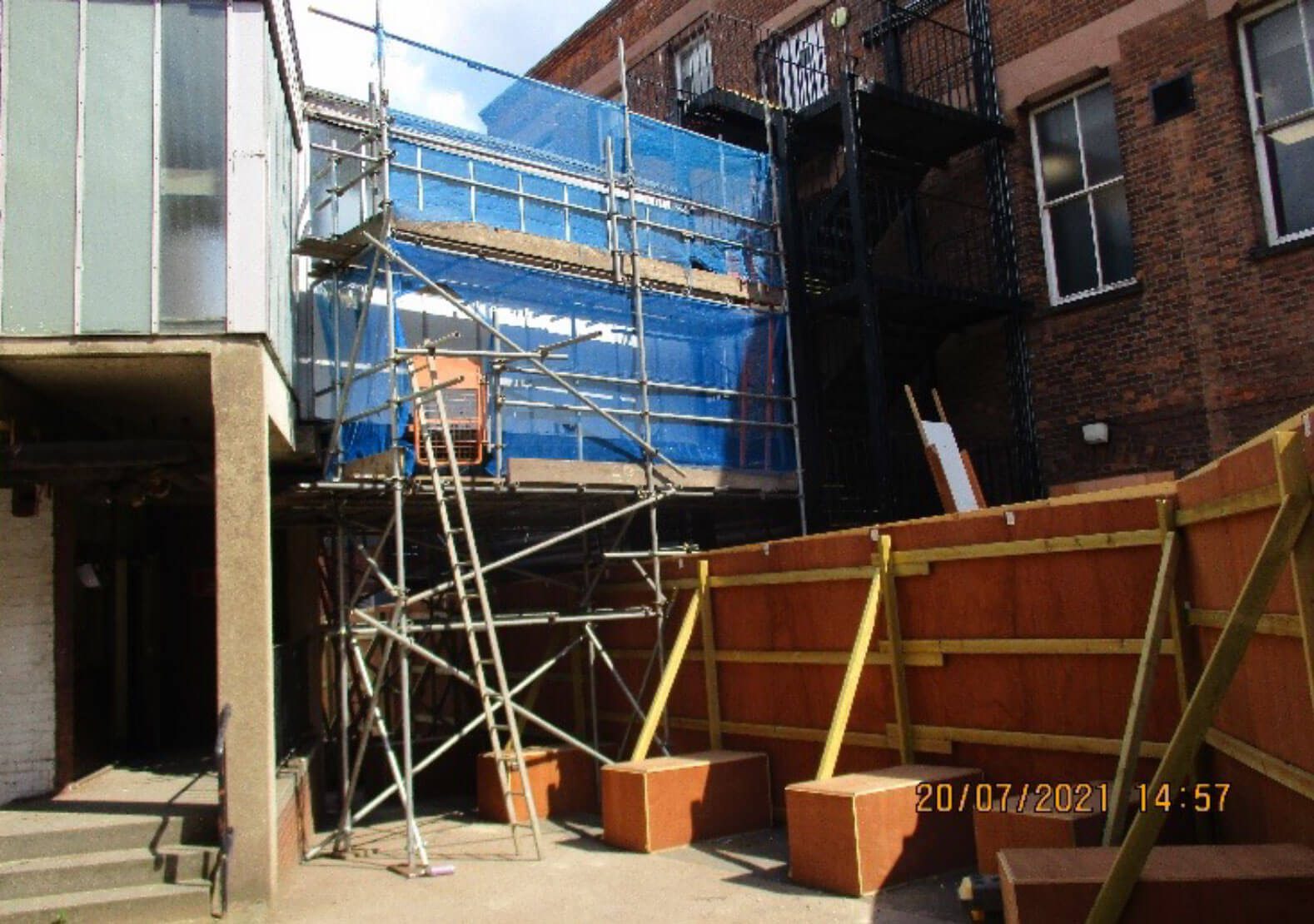 Asbestos materials were taken to a licenced tipping facility. Aggregate arisings were taken to a local Recycling Yard and processed for reuse within the construction industry.  Bricks and timber floor boards were salvaged and taken to our large reclamation yard in Burgess Hill, West Sussex.

A banksman provided safe access and egress for site traffic at all times. Access to the public road and footpaths were maintained. Site traffic routes and times were coordinated with travel routes and peak travel times of adjoining local residents. Parking of site vehicles was confined within the site compound area. Wheel washing and road sweeping facilities were provided and managed on a daily basis. A water dampening system provided regular dampening down for dust control. 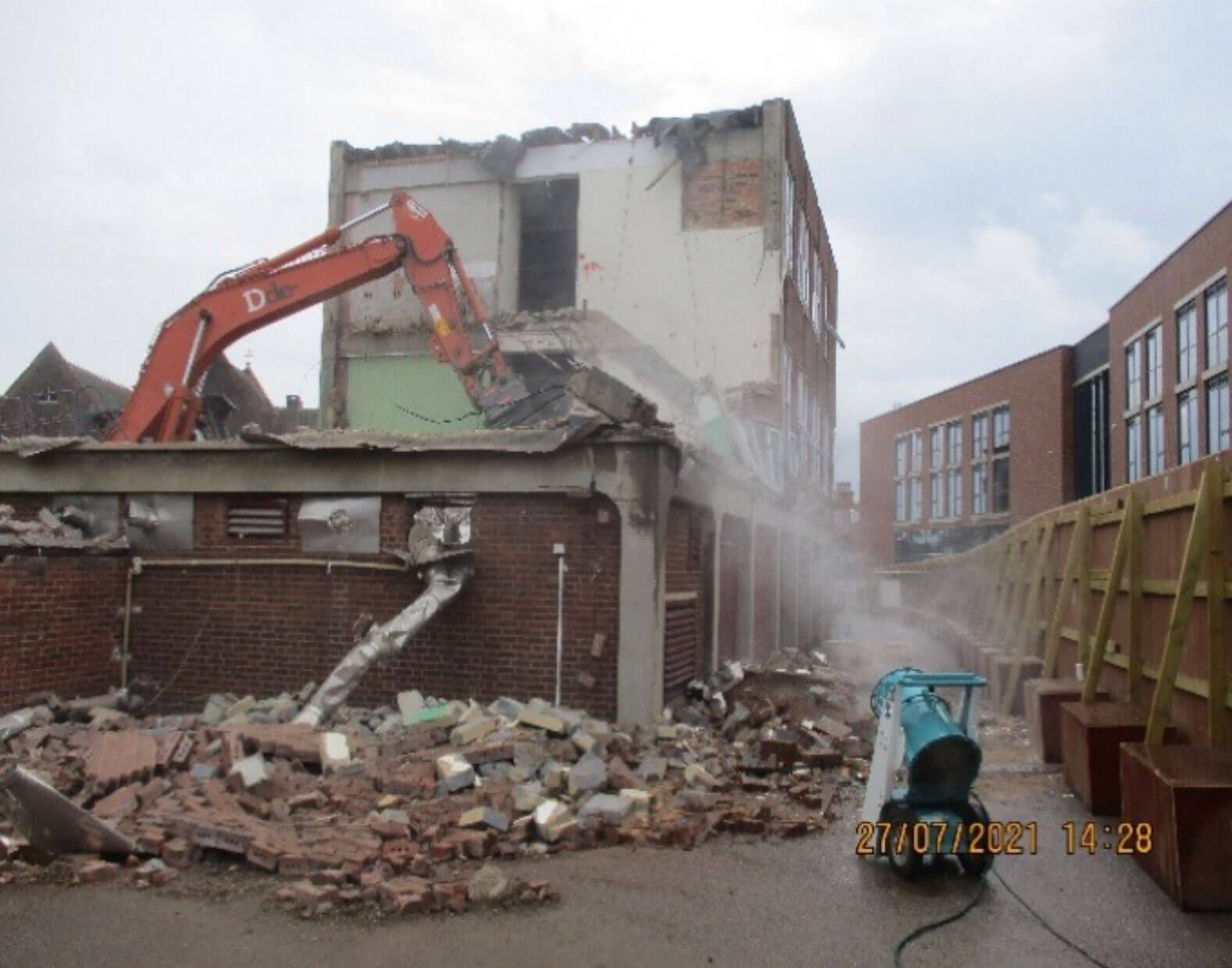 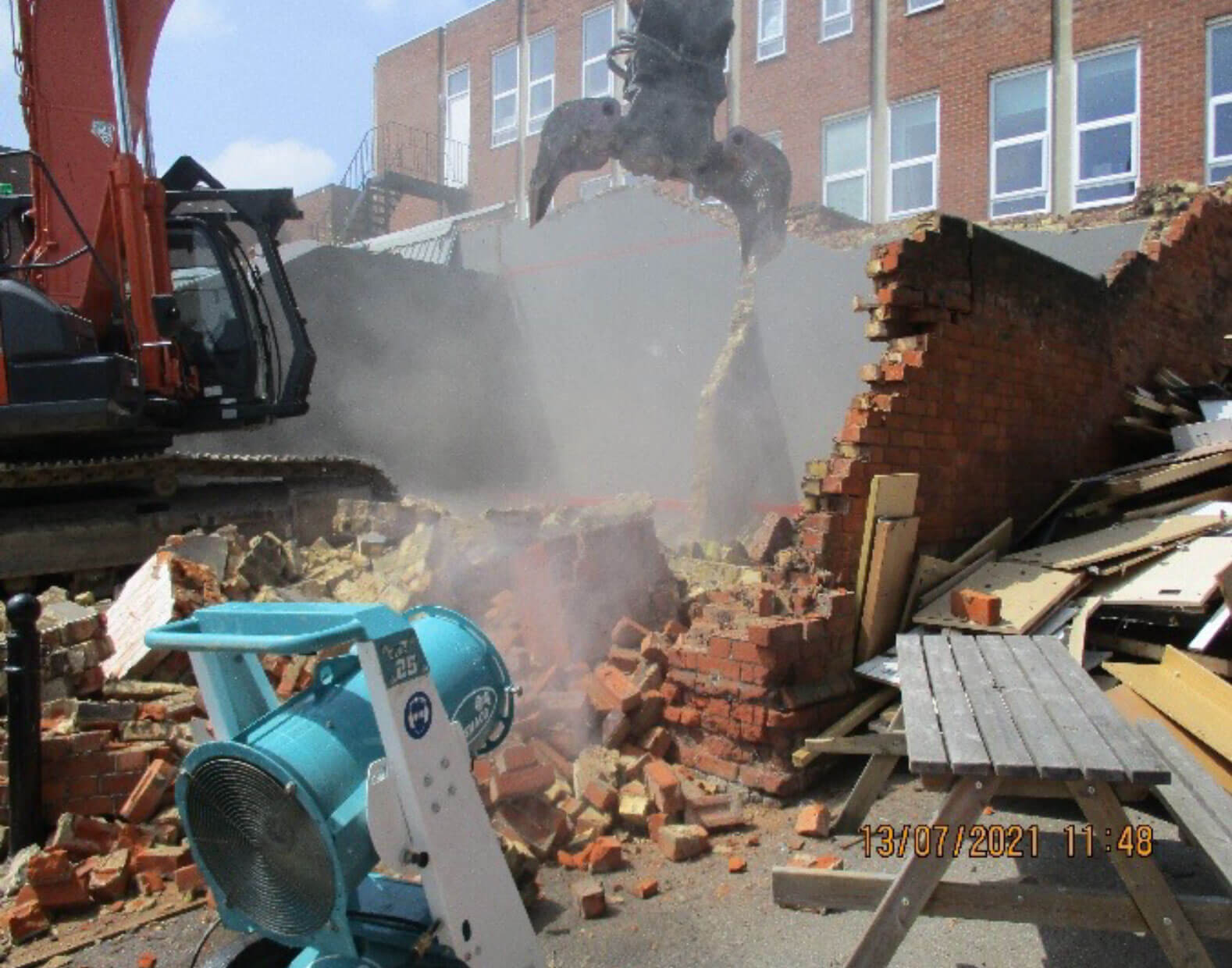 During the breaking out of a raised slab foundation to the Prep Block, asbestos debris was uncovered in the historic backfill material.  Works were immediately stopped pending sampling and testing.  The laboratory report confirmed the presence of asbestos cement and clinker. Dde commissioned a geo-environmental investigation to determine the extent of the contamination issue for landfill purposes. The report confirmed the contamination issue was localised to the original area only. The contaminated material, approximately 160 tonnes, was removed and disposed of at a licenced landfill site. A permeable geotextile membrane was laid prior to backfilling with site won clean crushed aggregates to make up levels. 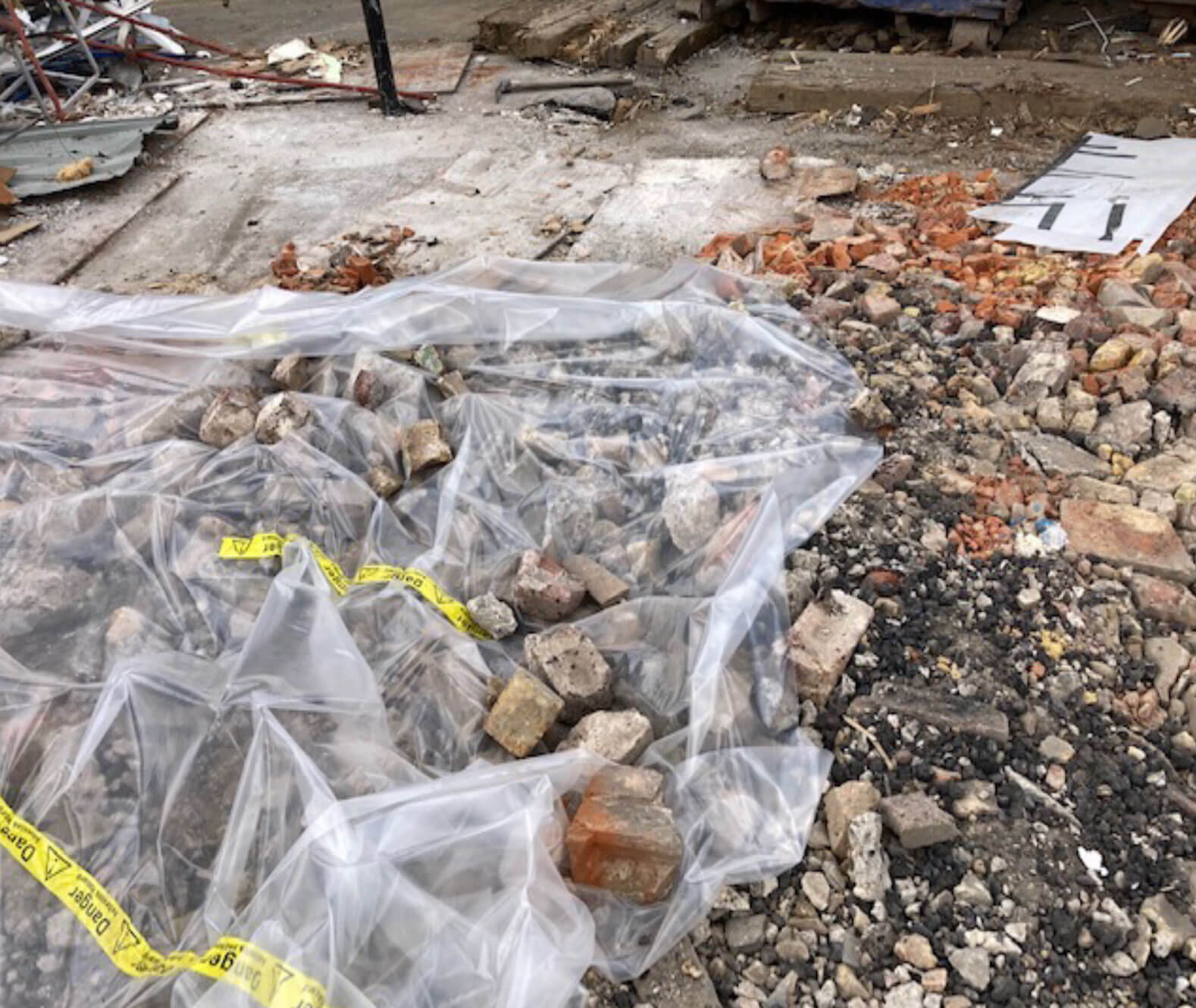 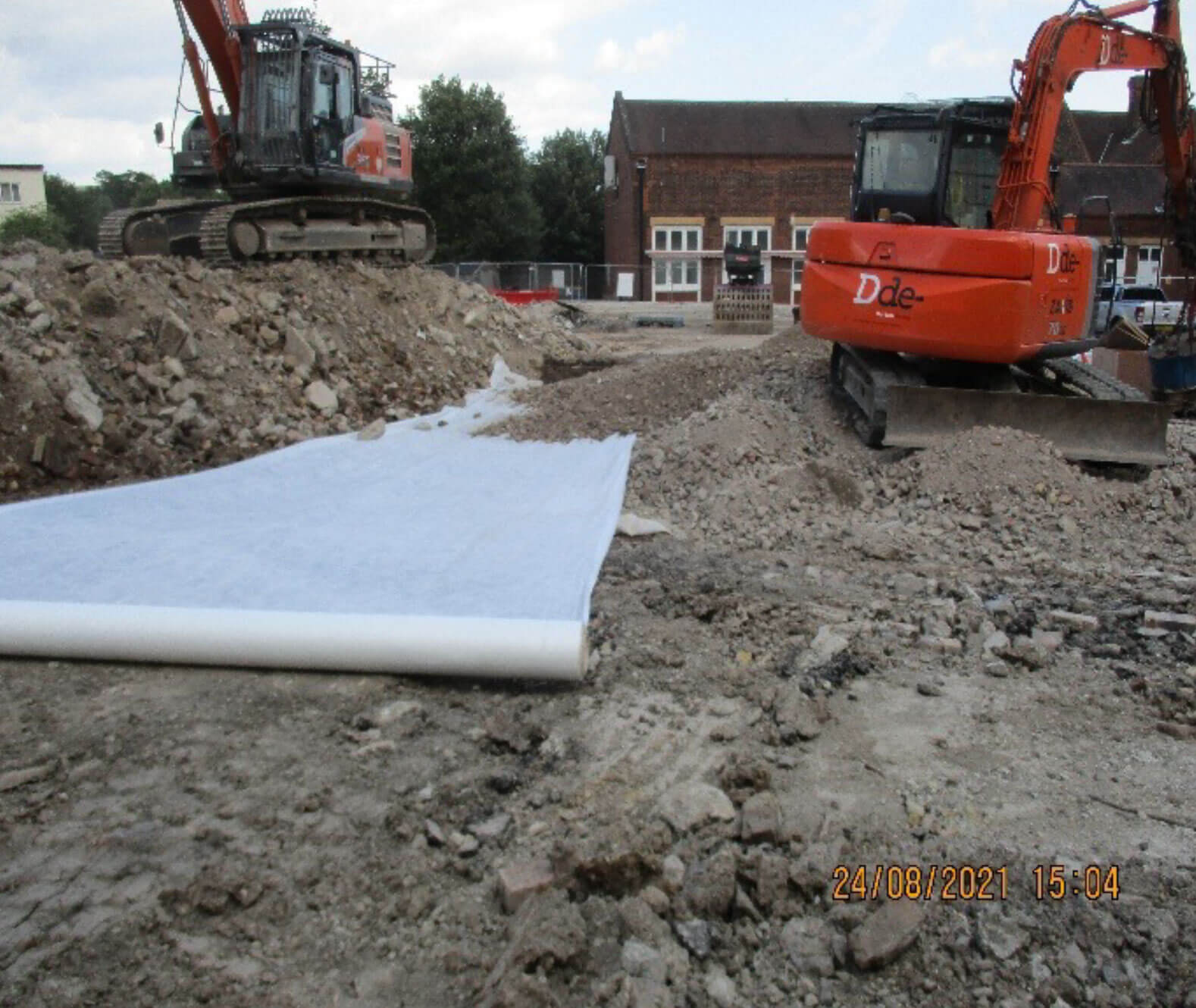 There were no accidents or reportable incidents on site. Regular communication with the college and neighbouring residents and prompt response actions resulted in excellent feedback. A close-down meeting was held and feedback was collected by the site team. Such discussions help determine success of future projects and prevent mistakes from being repeated. The Contract Administrator and college officials and caretakers advised that they were very satisfied with the quality of works that had been undertaken and that the site had been very well managed and controlled.

The site was awarded a Performance Beyond Compliance to confirm the site’s achievement in complying with the Considerate Constructors Scheme’s Code of Considerate Practice. 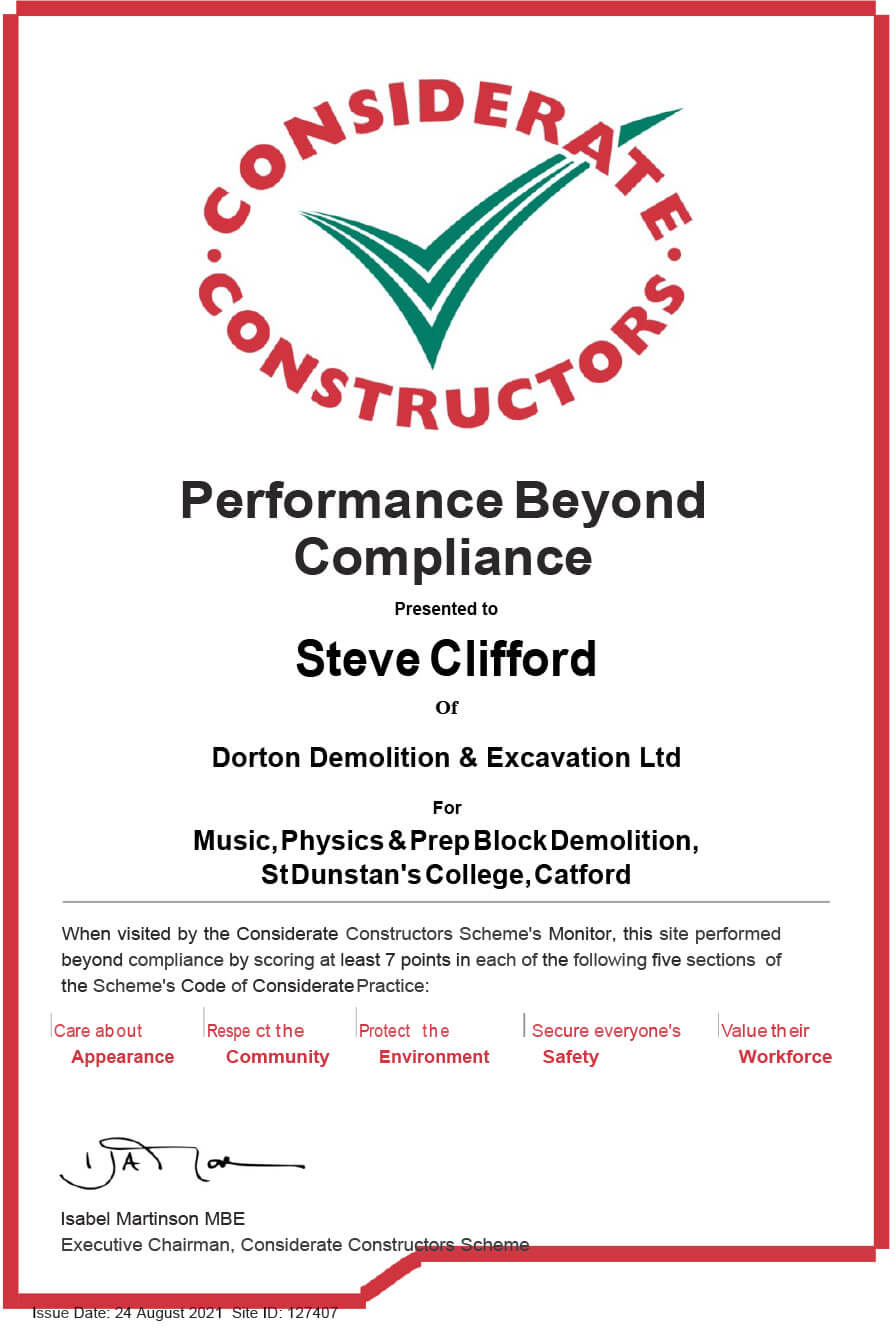