In early summer of 2008 we commenced the asbestos removal and demolition of one of Crawley’s land marks, the former Inland Revenue Offices, Bingo Hall, Ten Pin Bowling Alley and Pepys Restaurant. The 2 acre site is positioned on a large traffic Island that forms part of the inner town centre ring road and is heavily trafficked throughout the day. The Inland Revenue offices sat above a section of the Bingo Hall rising to 9 x storey’s in height with the front elevation adjacent to a busy bus lane. Opposite and close to one gable of the building was the ‘Bar Med’ a popular night club. On three other elevations across the busy dual carriageway of the ring road were newly occupied residential flats and the town centre shops and just to keep us on our toes a live electrical sub station was located immediately below the tower block at the far gable. Needless to say it was a site that had its potential for problems both on an operational level and an environmental level. 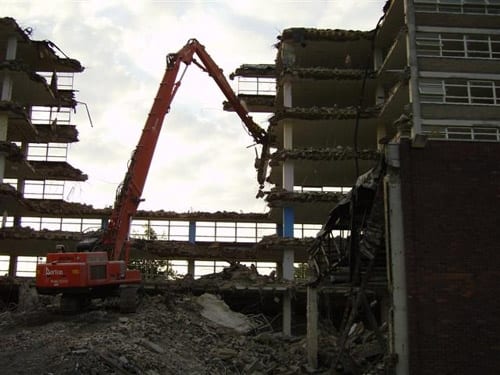 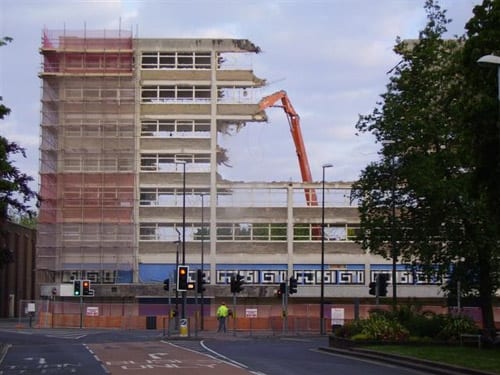 Following a hard fought programme of service disconnections and protective measures to the electrical sub-station and a month long asbestos removal process, we finally broke into the rear of the tower block in June 2008. Unlike the Bingo Hall and the Ten Pin Bowling Alley, which had a steel frame, the tower block was an all reinforced concrete frame with brick infill panels and cast insitu floor slabs. The shear walls, ( strongest part ) were at each gable in the form of a lift shaft and stairwell respectively. Our mode of attack therefore was to work centre outwards towards the shear walls thereby maintaining the robustness of the structure until such time as the demolition sequence dictated otherwise.

The 16 week project programme was tight but we managed to stay on course and actually finished nearly a week ahead of the schedule.

Dusty conditions were a potential problem but having invested in a ‘Dust Boss’ machine, which pushed a fine mist of water under fire hydrant pressure up to 30 metres in height, we kept on top of the situation and satisfied the local neighbourhood as well as the Environmental Health Officer.