Bellway Homes purchased a 2.3-acre site which was to be incorporated within their Oakley Park housing development scheme. The site, Hamsell Mead Farm, was occupied by a two-storey farmhouse building, outbuildings of various sizes and construction including former chicken sheds and an egg packing shed, a domestic garage, workshop, driveways, car parking and garden areas.

Groundworks had commenced to the adjacent Oakley Park housing development which bounded the site to the north, south and west. The east boundary of the site was woodland with several mature trees and shrubs and a pond.   Earlier investigations which including contamination testing of soils and asbestos screening had recorded bonded asbestos (chrysotile asbestos cement) contamination within near surface soils on the central, northern and southern part of the site. 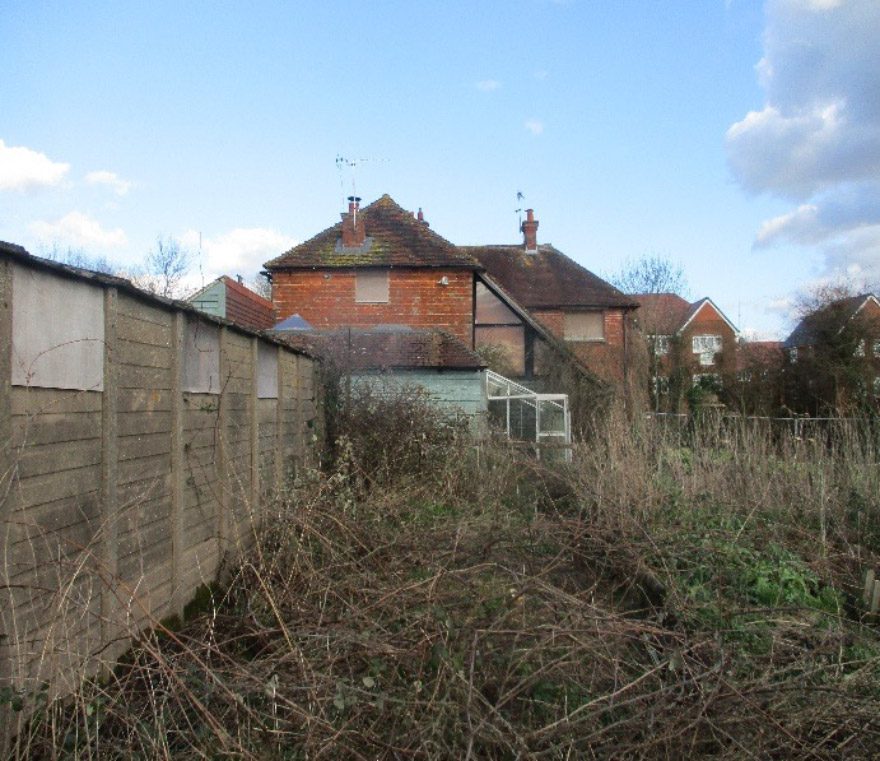 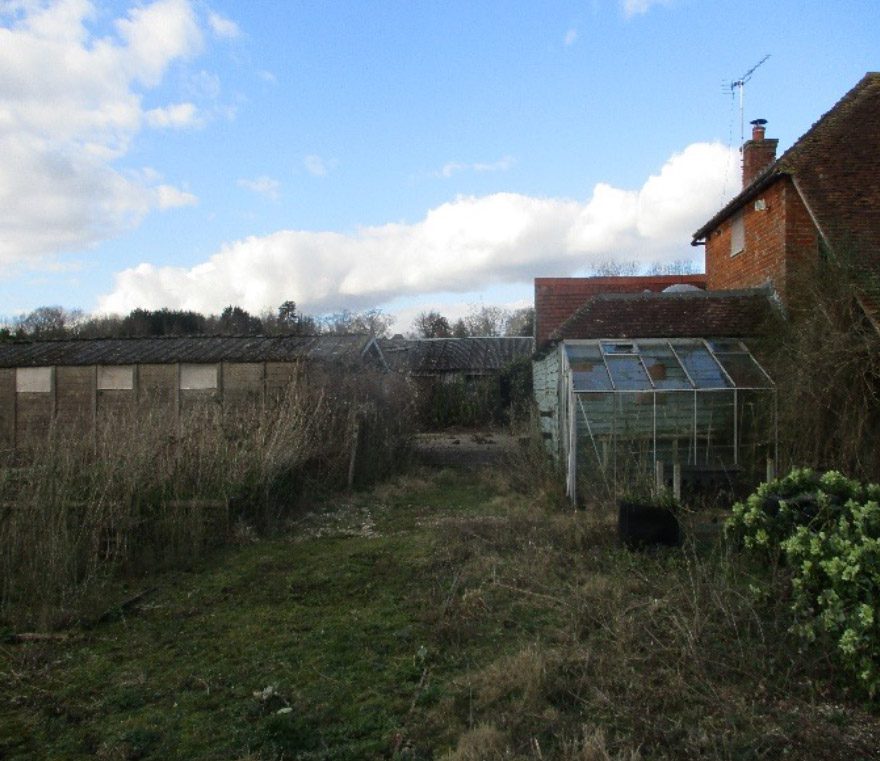 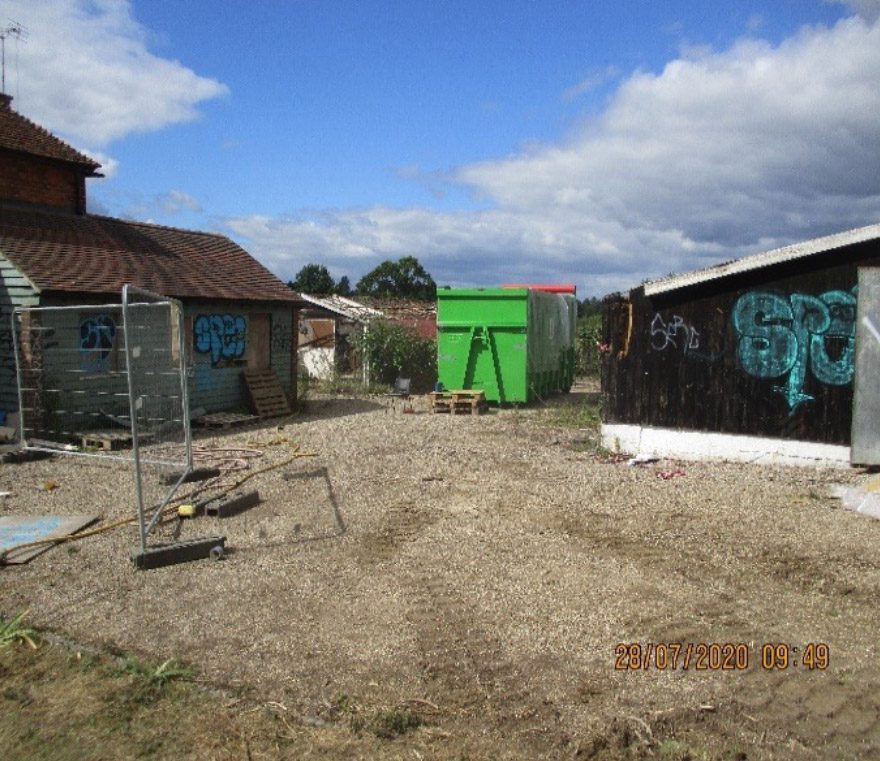 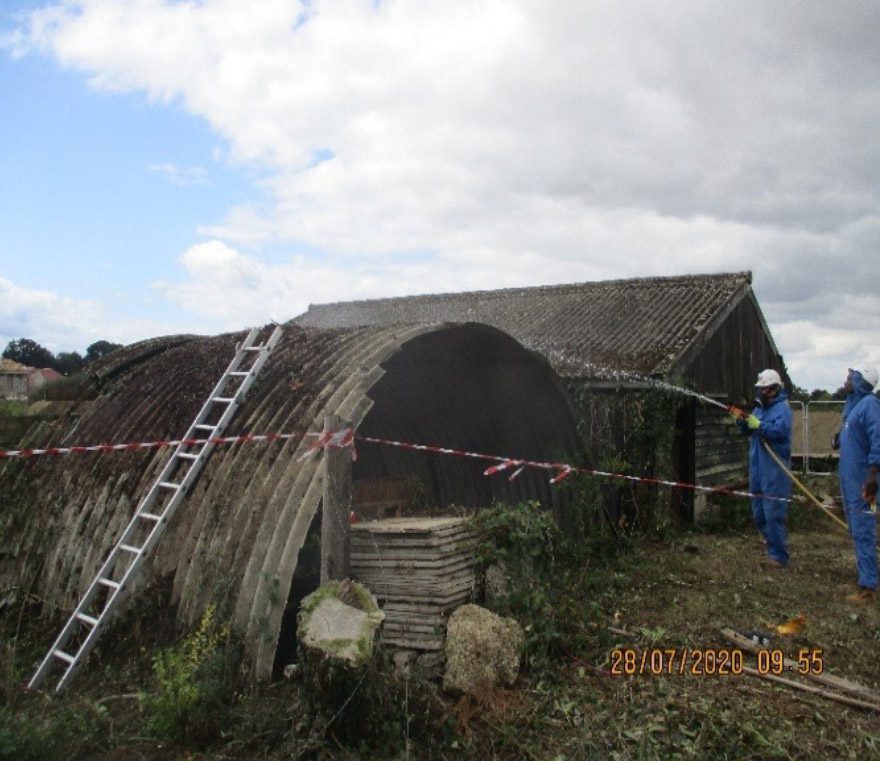 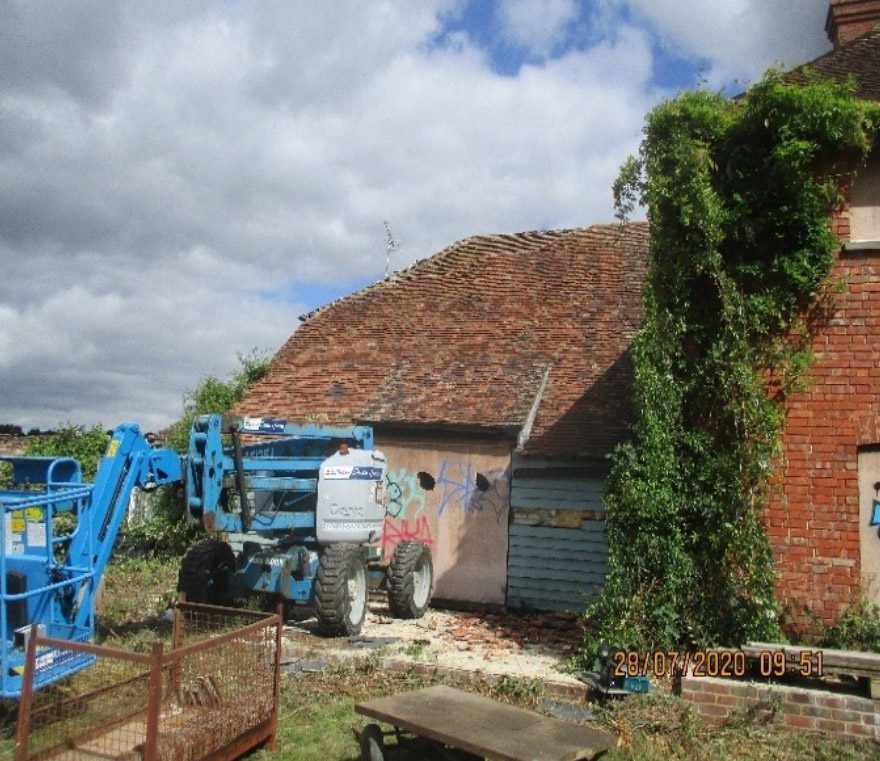 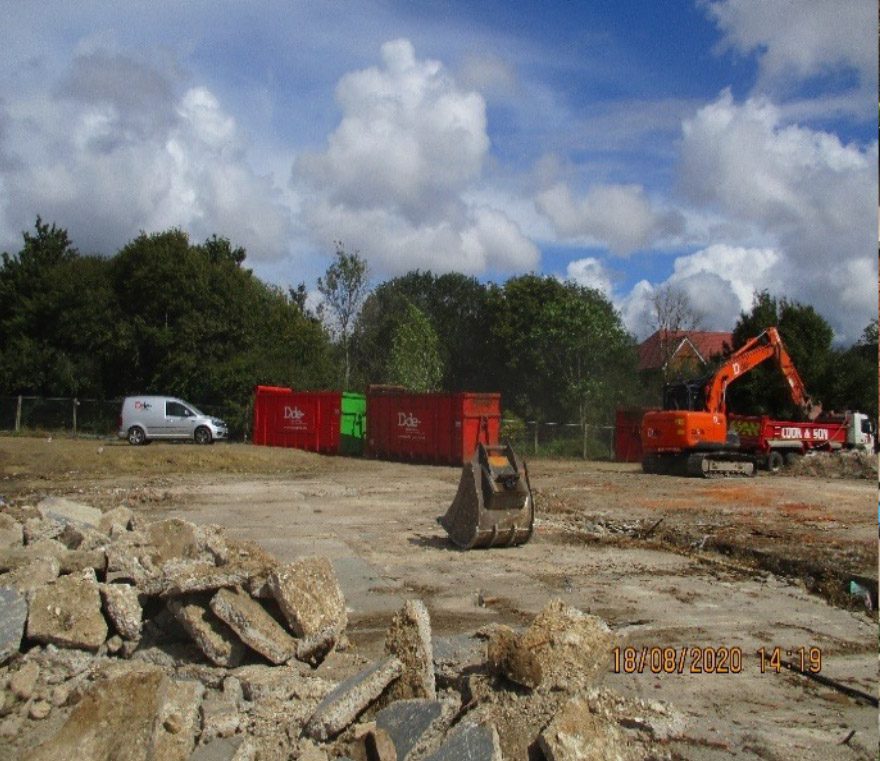 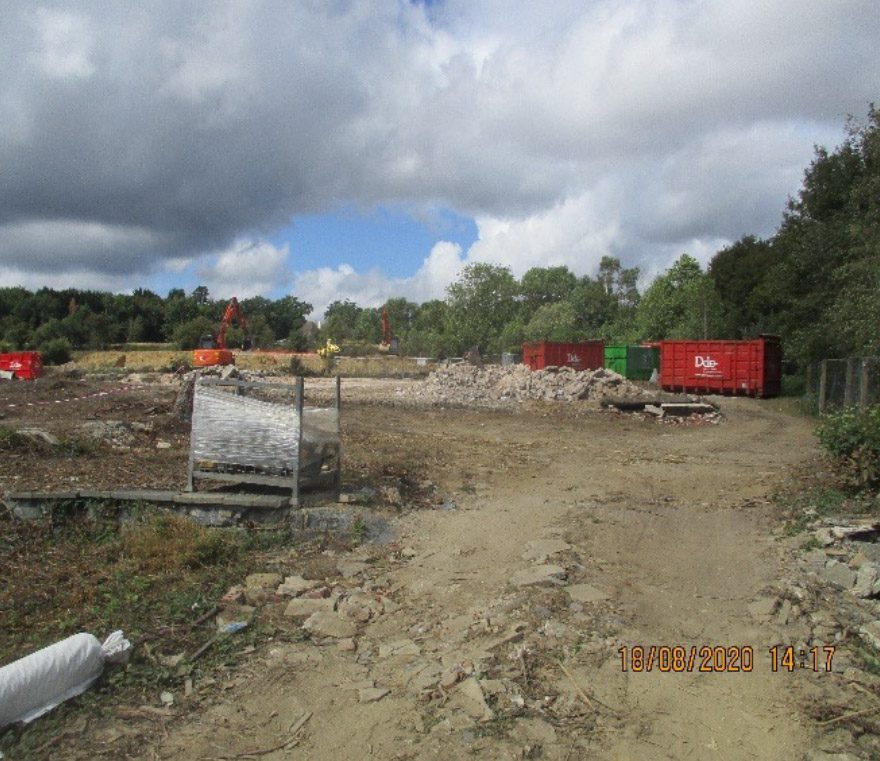 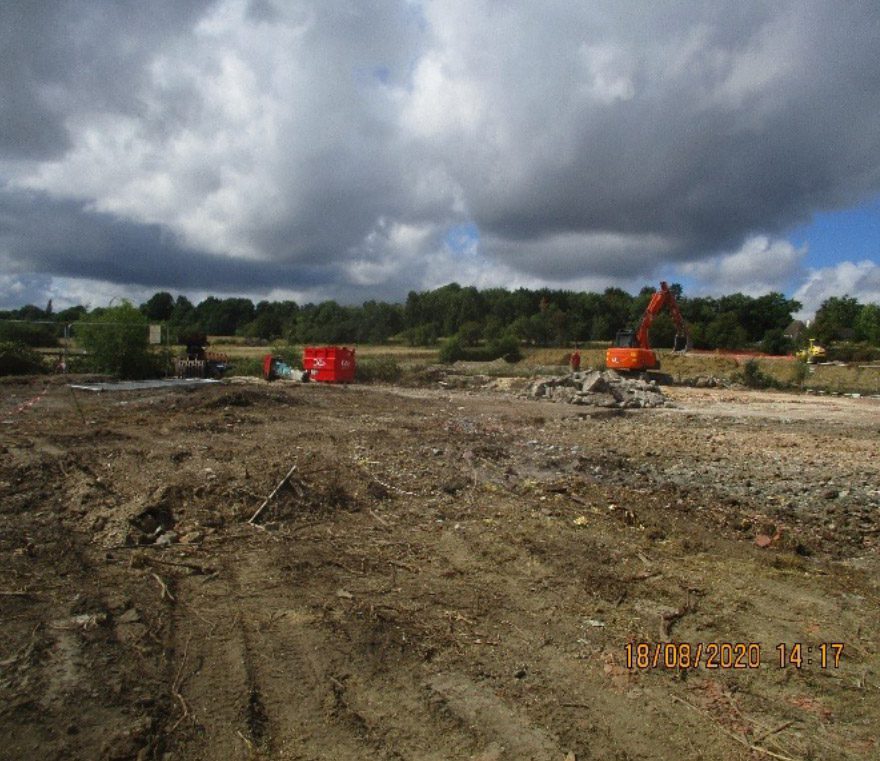 The ground conditions across the site generally comprised of made ground extending to depths of between 0.30m and 0.90m below ground level, overlying stiff Weald Clay Formation. Gravel within the made ground included fine to coarse brick, clinker, ash, flint, sandstone and glass with occasional fragments of suspected asbestos. Several of the outbuildings had asbestos cement roofs. Other buildings had been re-roofed relatively recently, with former asbestos cement roof sheets stockpiled on the site. Fragments of asbestos cement were present on the ground surface. Bulk bags containing asbestos fragments were located adjacent to the chicken coops – it was understood that the previous owner picked asbestos cement from the ground surface as it become unearthed by his chickens.

Dde undertook an options appraisal to derive an appropriate and most advantageous remediation strategy. Given the large volume of material requiring treatment, on-site treatment options were considered to be most practical and economically viable and recommended to the client. The original option to excavate and dispose contaminated made ground to a landfill site or off-site soil treatment facility (‘dig and dump’) was considered to have the least cost benefit for the client.

In accordance with Dde’s recommendation, an on-site treatment strategy was developed. Asbestos contaminated made ground was excavated and the soil passed through an on-site picking station. Asbestos fragments were separated by hand and double-bagged separately for disposal to landfill. The remediated soil was then retested and re-classified prior to removal from site. This on-site soil treatment strategy created a useful product rather than waste.

The Asbestos Plan of Works, developed by Dde and approved by the client, was in brief:

Whilst lifting the ground bearing concrete floor slabs of the structures on site, further asbestos cement contamination was uncovered adhered to the underside of the concrete slabs and in the sub-base material. 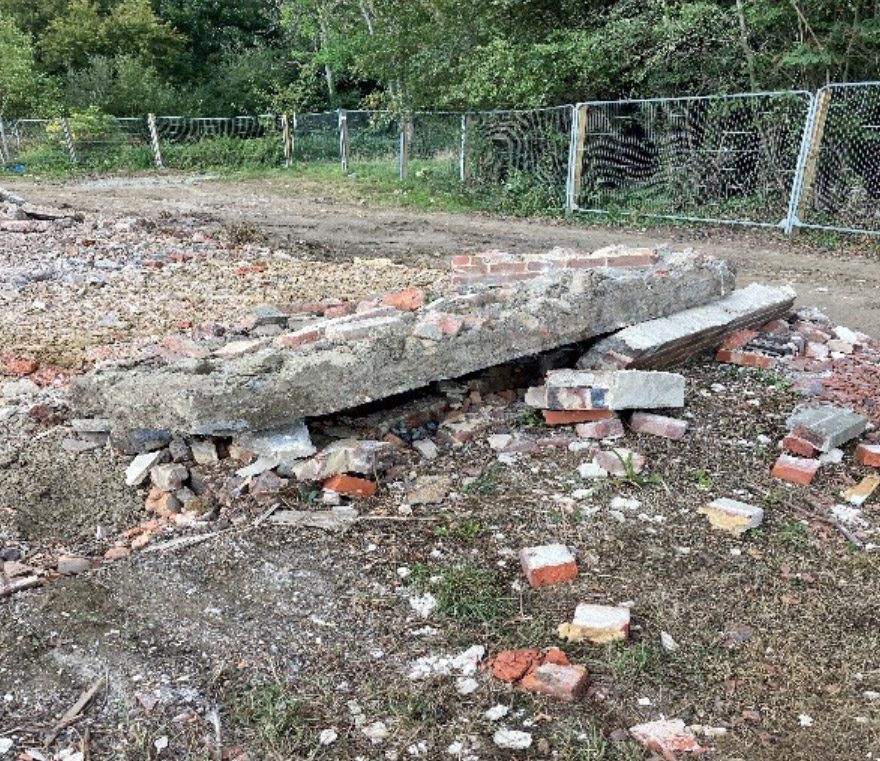 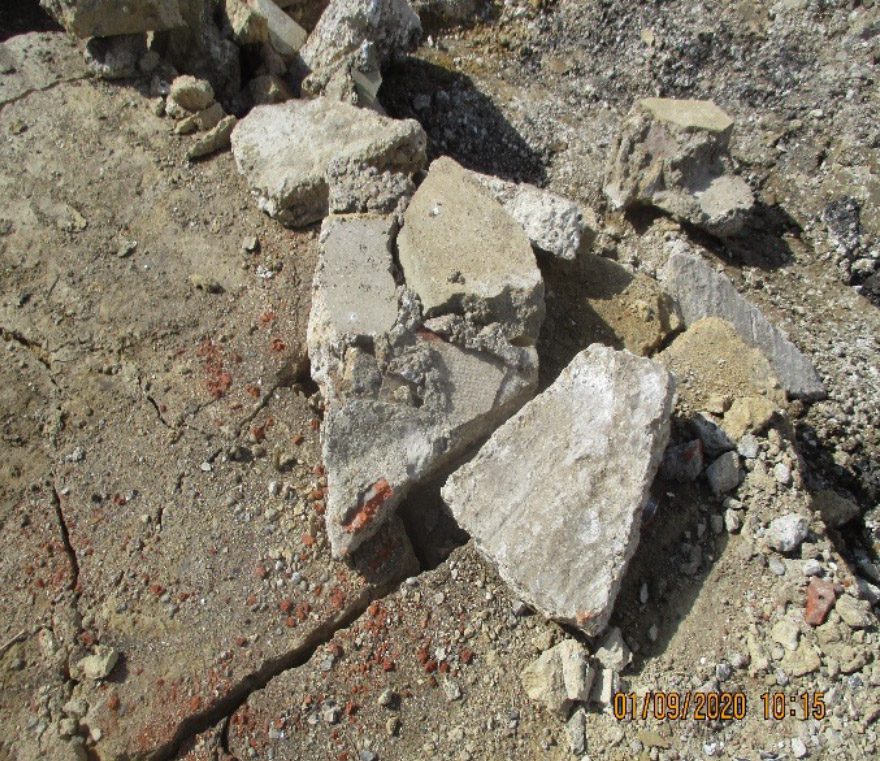 All handpicked asbestos fragments were double-bagged appropriately, placed in lockable skips, and taken to a licensed asbestos-disposal facility. Dde is a registered waste carrier. Waste consignment notes were maintained on site at all times. All soil verification work was undertaken by engineers from Leap Environmental Limited. Dust was controlled on site at all times during excavation and movement of soils and particularly during work in designated areas. Work in designated areas was regularly assessed and additional dust suppression used as deemed necessary. Welfare facilities were located outside the designated areas. Reassurance asbestos air monitoring was undertaken as required at a minimum weekly and was targeted to monitor conditions during work.

A careful watching brief was maintained throughout for any undiscovered asbestos contaminated materials. Where asbestos contamination was discovered which was greater or significantly different than that identified by the site investigation, then work was suspended in that specific location and the area quarantined. A competent person made an assessment of the area and confirmed whether work could continue as before or, required additional controls, procedures or notifications. On completion a remediation verification report was prepared documenting all work undertaken. 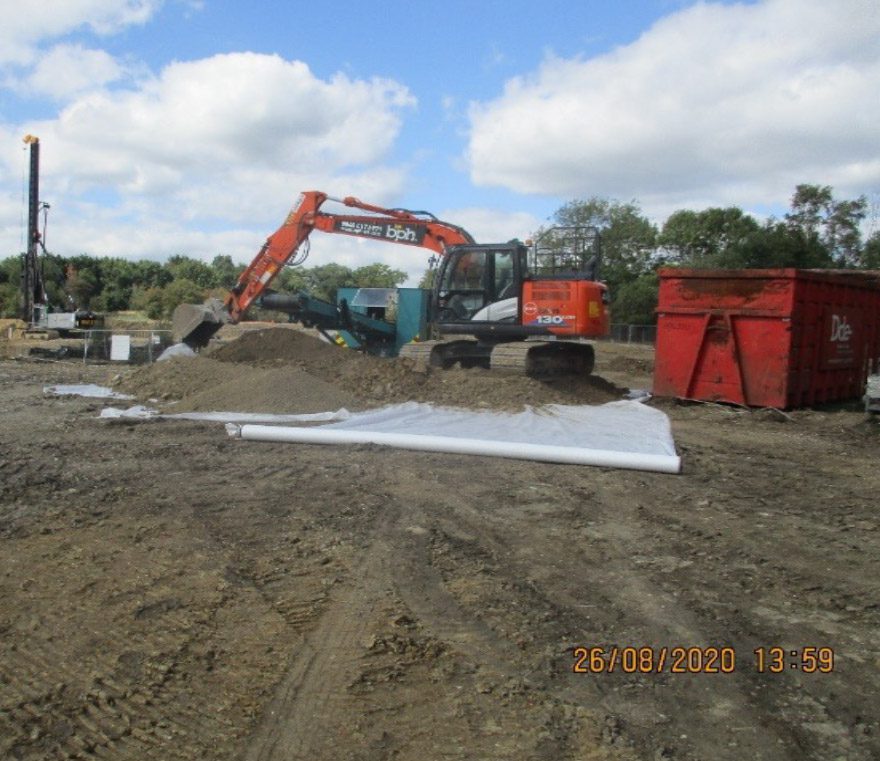 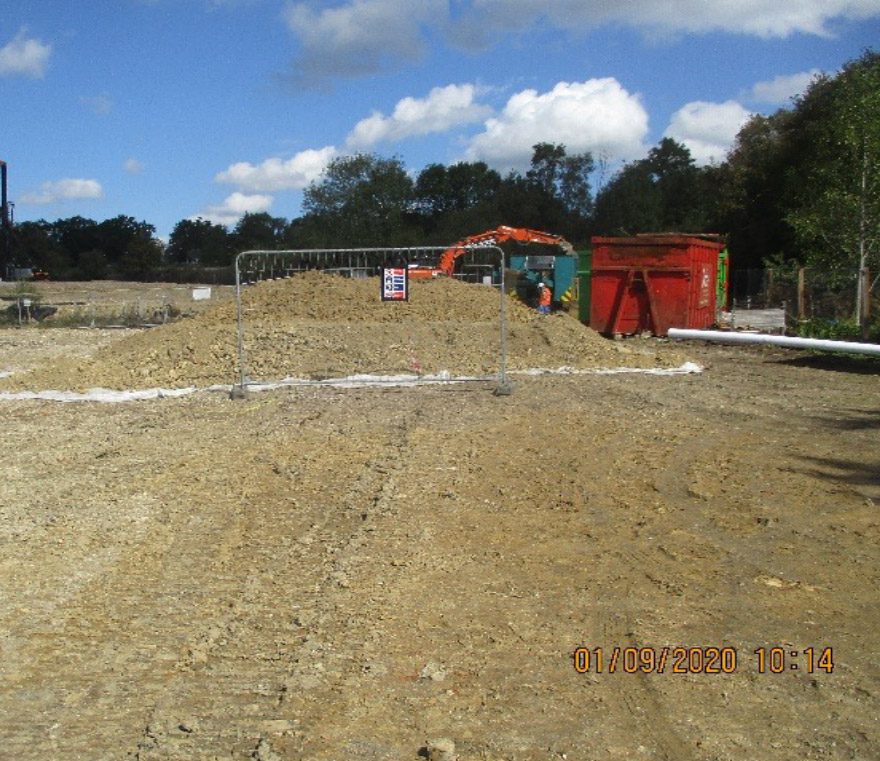 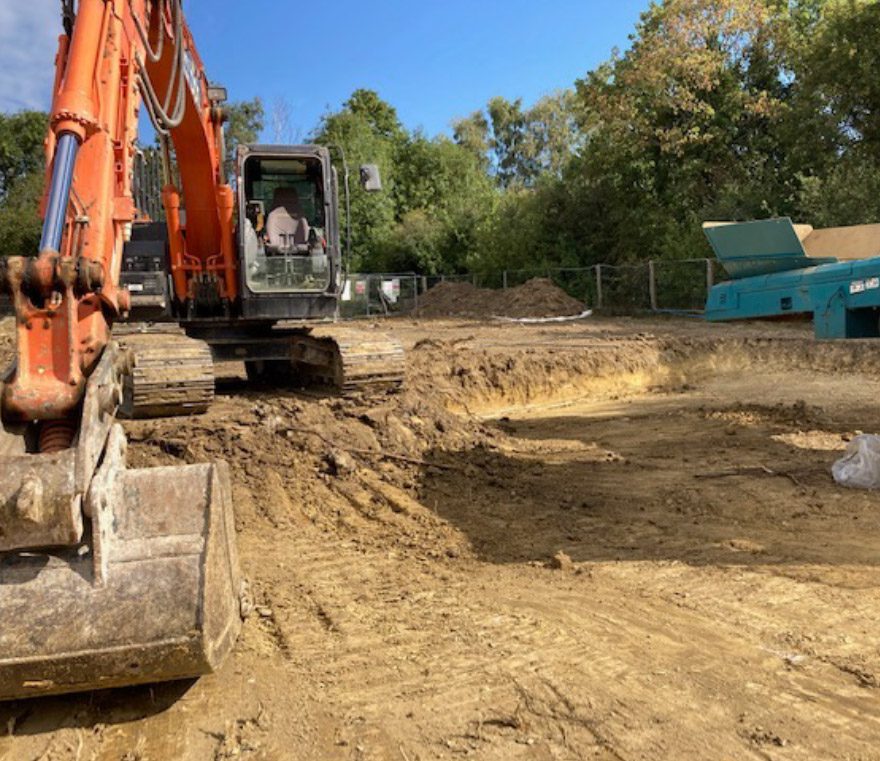 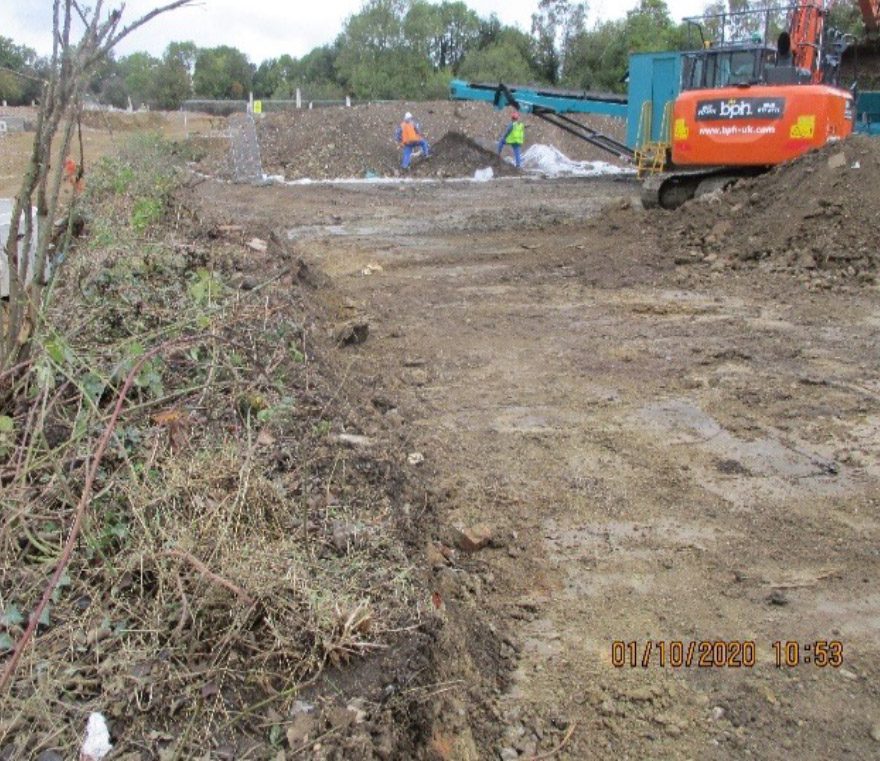 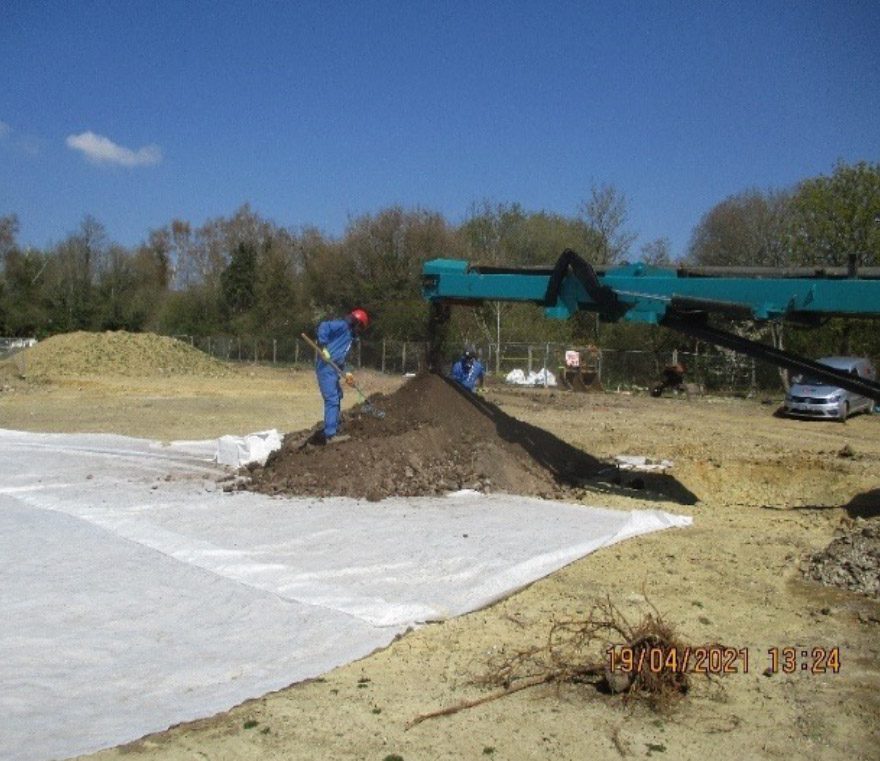 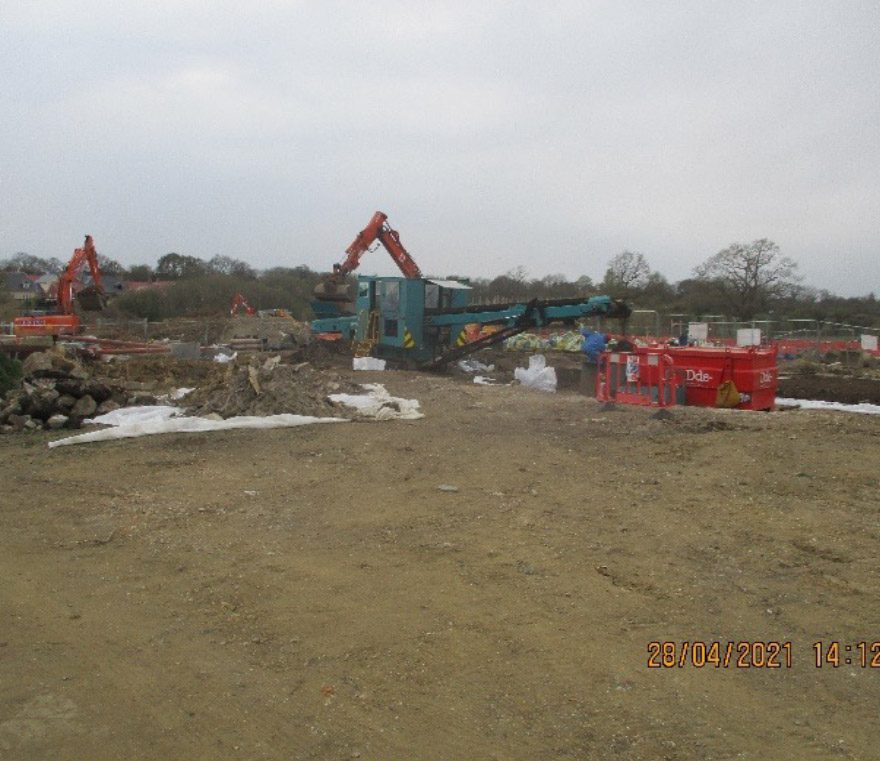 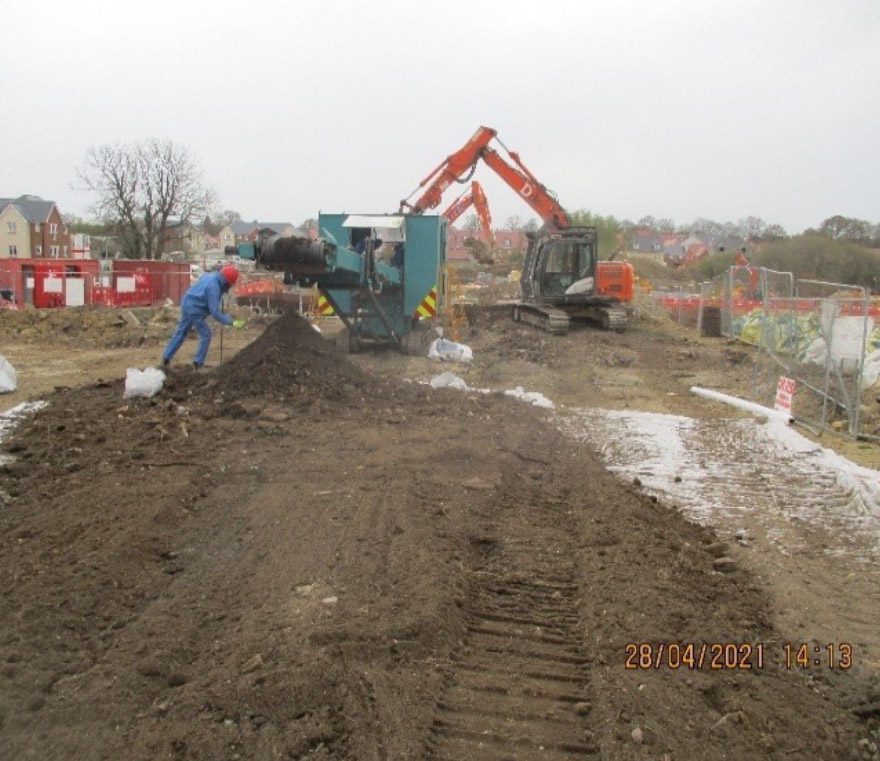 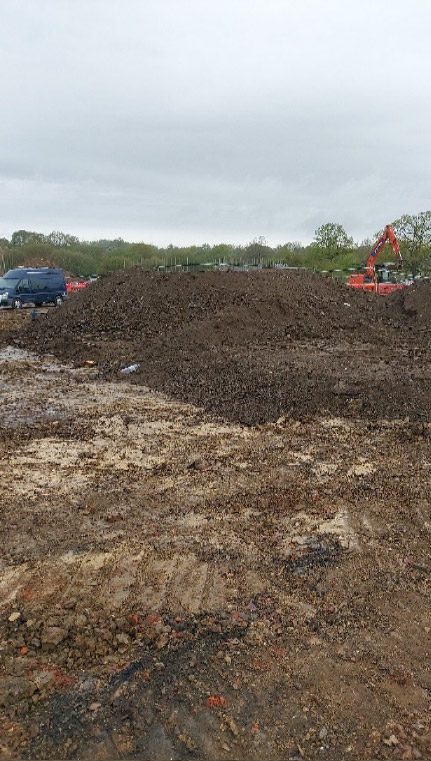 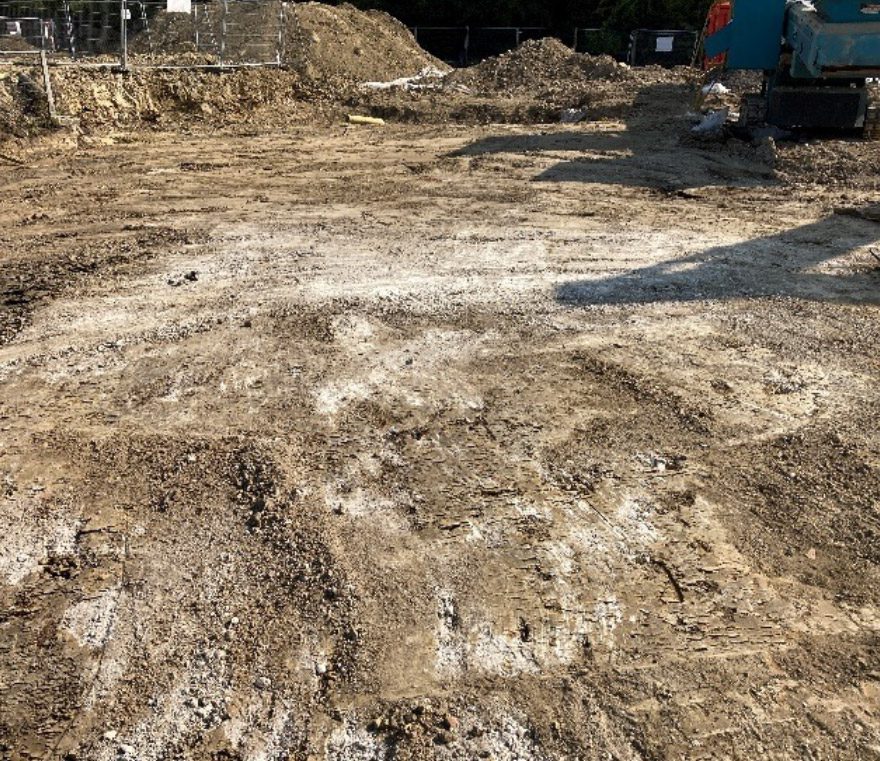 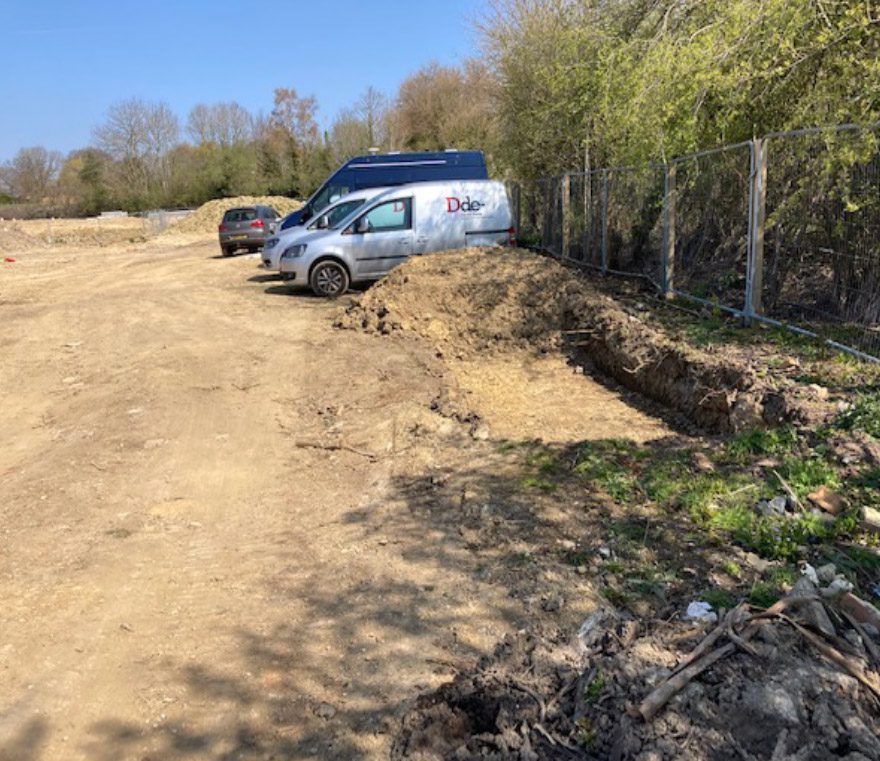 Works had to be suspended in October 2020. Heavy and persistent rain as well as strong winds across the whole UK led to records for daily rainfall totals and wind gusts. The south-east of England experienced the highest volume of rainfall. The wettest October since at least 1797 was recorded.

Dde returned to site in April 2021 to complete the remediation work.

As an estimate, the financial saving for the client, by employing Dde’s proposal for on-site remediation, was in the region of £1,200,000.00 nett. This was equivalent to 4-times cheaper than the ‘dig and dump’ strategy.

Groundworks are now complete on Hamsell Mead Farm with no asbestos contamination encountered in the ground.

The total tonnage of demolition waste was: