With its 1,800-capacity auditorium, the Astoria was the largest cinema on the south coast of England and was classed as a “super-cinema”. The Grade II Listed Brighton Astoria was built by Griggs & Son Ltd. for E. E. Lyons and designed by Edward Albert Stone, who also designed the Astorias in Brixton, Streatham, Finsbury Park, Charing Cross Road, and the Old Kent Road in London. The ‘super-cinema’ had an Art Deco auditorium decorated by Henri & Laverdet, was capable of seating 1,823 people, and had a Tea Room, Restaurant, and full stage facilities. It first opened on Thursday the 21st of December 1933. 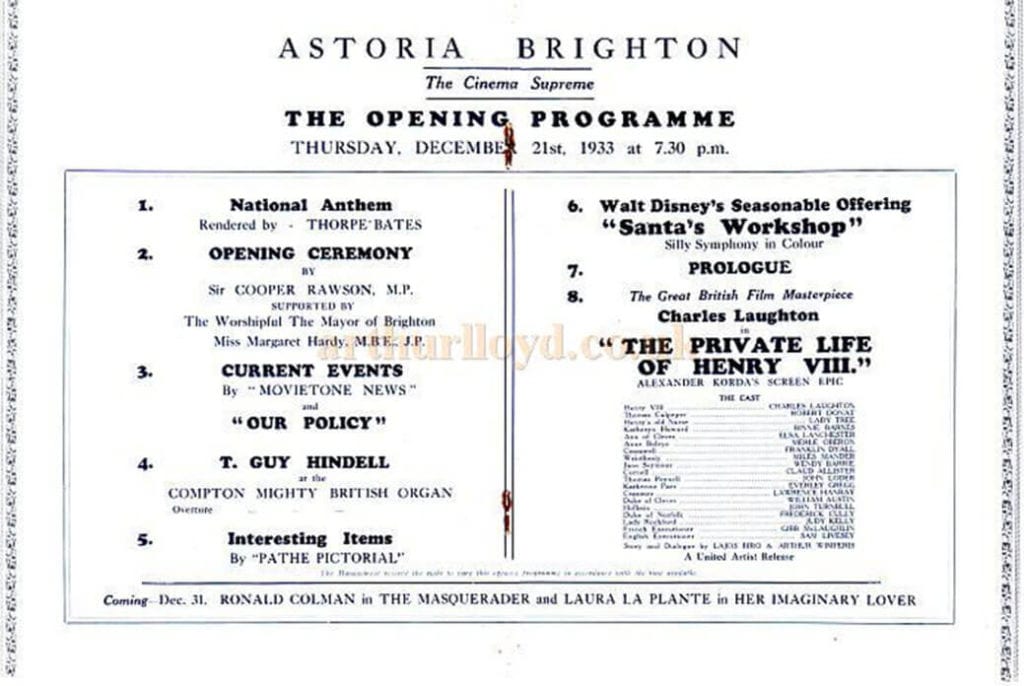 Decline quickly set in during the 1970s. The last film, Barbra Streisand’s A Star is Born, ran from 31 March to 7 May 1977. Entertainment company EMI bought the Astoria in 1976 and were granted a bingo licence. By the 1980s it operated under the Coral Bingo brand, which changed to Gala Bingo in the 1990s. In 1997 the Astoria closed again. The building was listed at Grade II by English Heritage on 22 November 2000.

The completed Astoria in 1934, when Brighton still had trams. 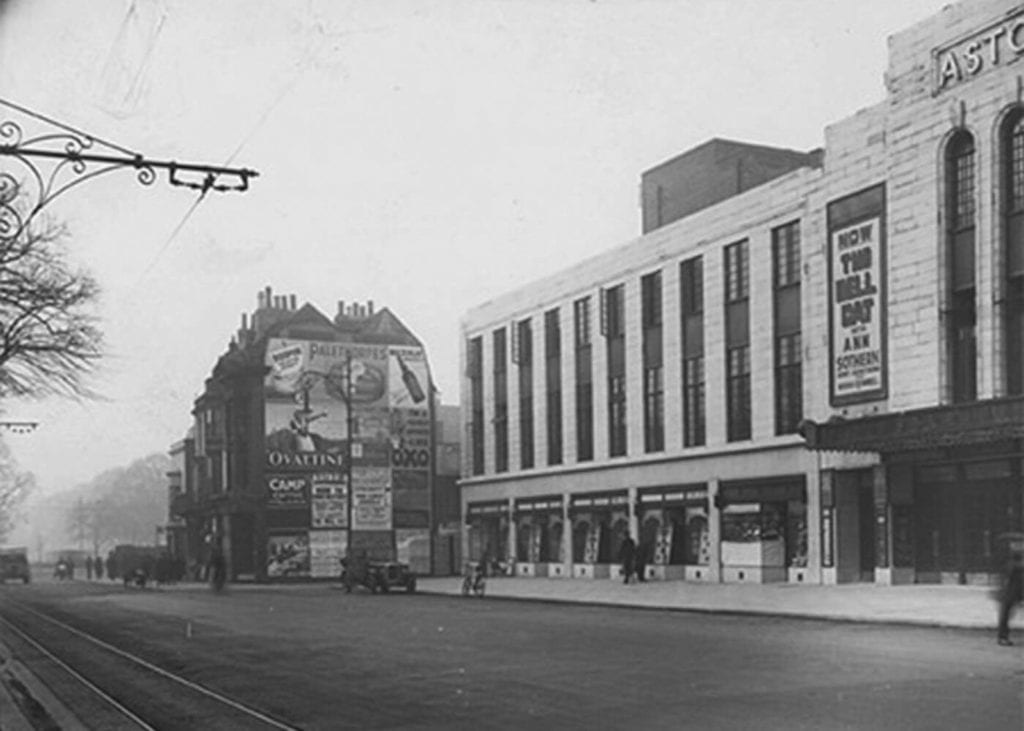 The Astoria auditorium in 1958. 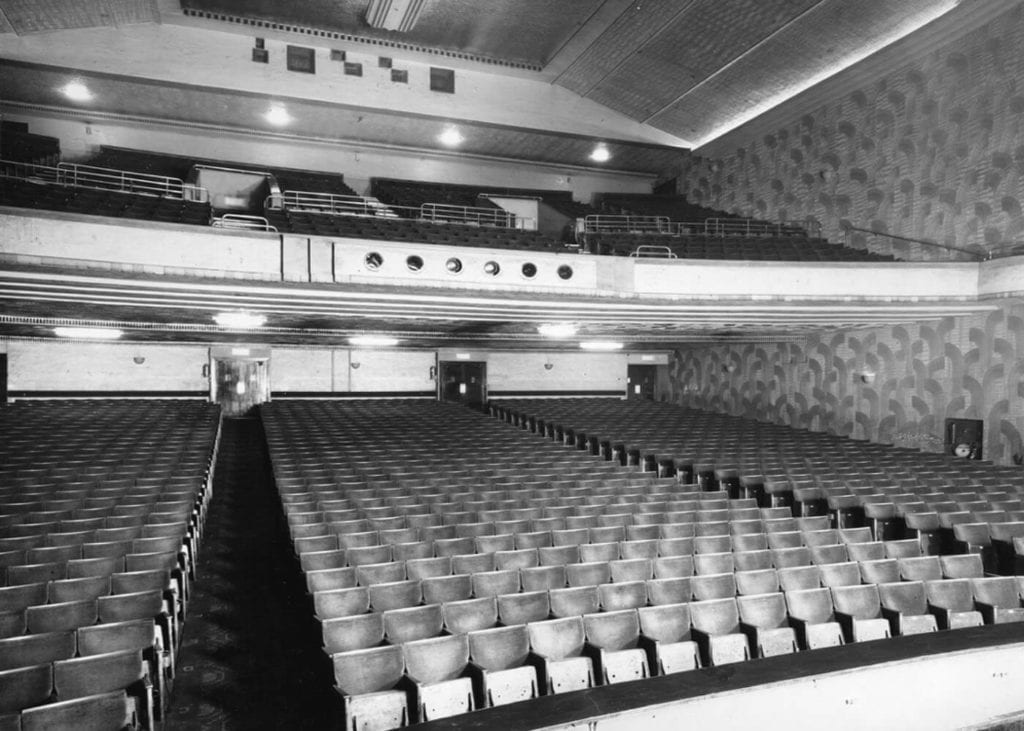 To justify the demolition of the Grade II-listed building, a surveyor was commissioned to prepare a heritage report which stated that the building ‘has had its day’ and had declined to an irreparable state. In December 2014 the building was sold to Unicity, part of Knightsbridge Student Housing. In March 2015 Dorton Group was awarded a contract to carry out an asbestos refurbishment and demolition survey and subsequent removal of asbestos contaminated materials to main thoroughfares to provide safe access for Heritage England to record artifacts and for management purposes. Due to the poor condition of the building, certain asbestos features had degraded, timber flooring had collapsed in many areas due to water ingress, and floors were littered with about an inch thick of pigeon guano which had accumulated over the years since the closing of the building. The removal of asbestos contaminated materials and environmental clean of main thoroughfares was limited to only part of the ground floor. Upper floors and the auditorium were inaccessible.

The site is within a prime city centre setting, with Blenheim Place and an office block – Trustcard House – to the south boundary, One Church Brighton – a flint and brick Baptist church built circa1903 by George Baines – to the north boundary, 38 Cheltenham Place and 4 Blenheim Place residential houses to the west boundary, and Gloucester Place highway to the east boundary. Other nearby buildings include the elaborate Tudor Revival King and Queen pub and the Neo-Georgian Allied Irish Bank branch both built in the 1930s and Grade II-listed, and St Peter’s Church, the landmark former parish church of Brighton.

In a nod to the past, the demolition package included salvaging some of the original features and furniture such as the auditorium seats, decorative metal grills mounted to walls at high levels in the auditorium, and the ASTORIA lettering to the external building façade. These were to be integrated into the new proposed building.

The demolition works faced several complexities due to the following main factors:

Dde successfully coordinated the various logistical needs and appreciated the wider aspects and impacts associated with this type of demolition operation. The site team undertook comprehensive planning, careful risk management and implemented and maintained open communication at all times with the project team. The extensive demolition knowledge base allowed an innovative approach enabling the successful completion of this challenging and complex project. 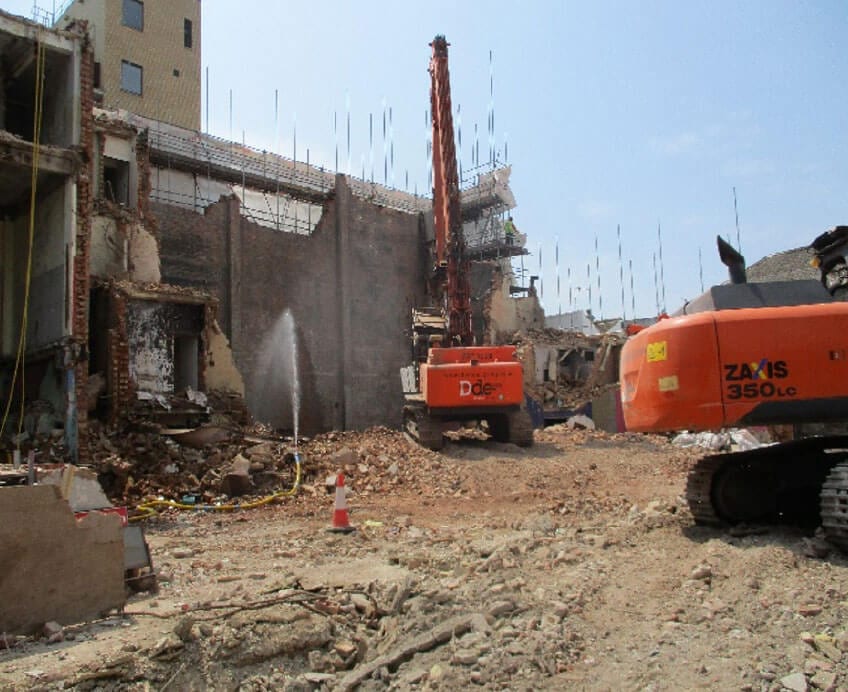 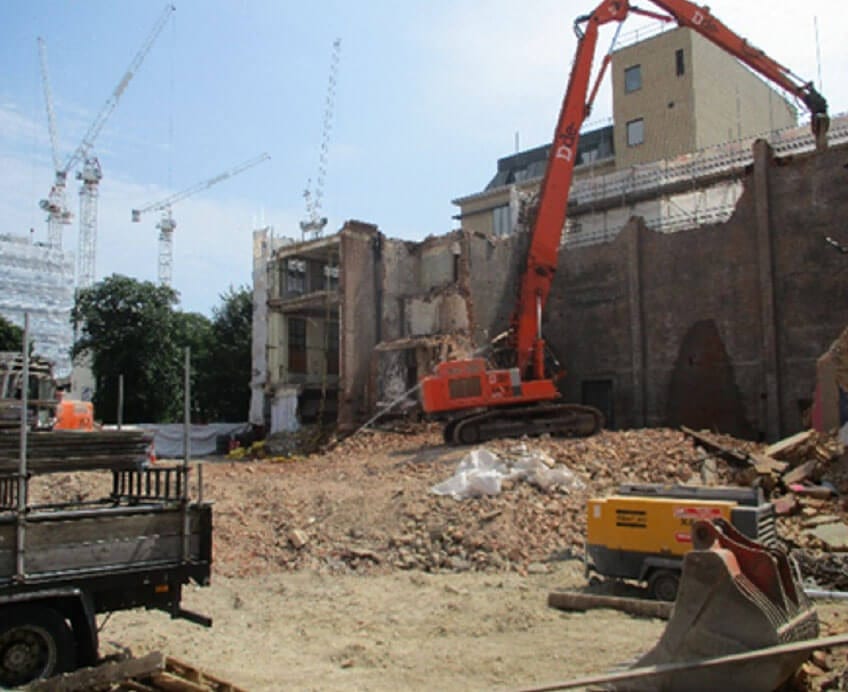 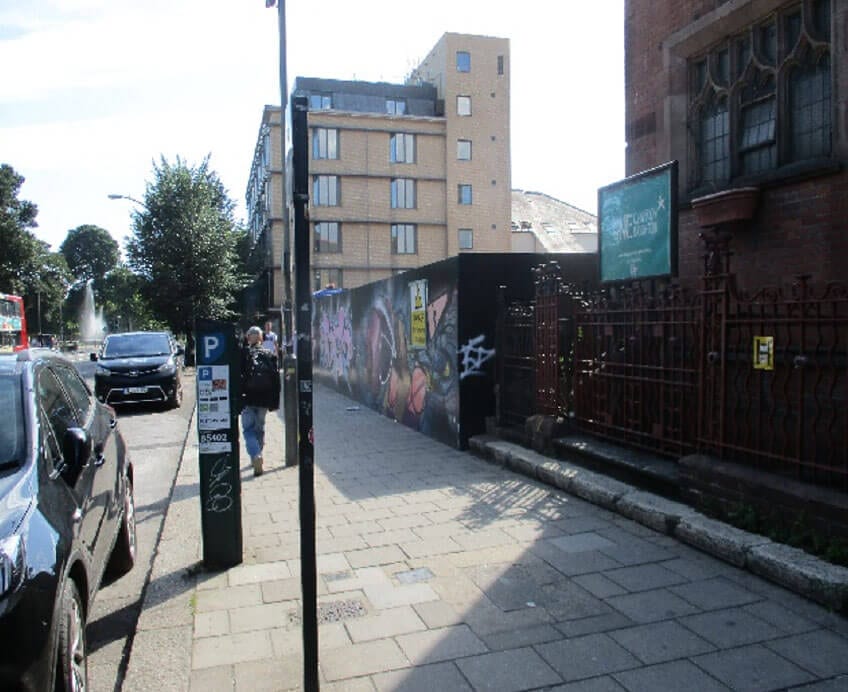 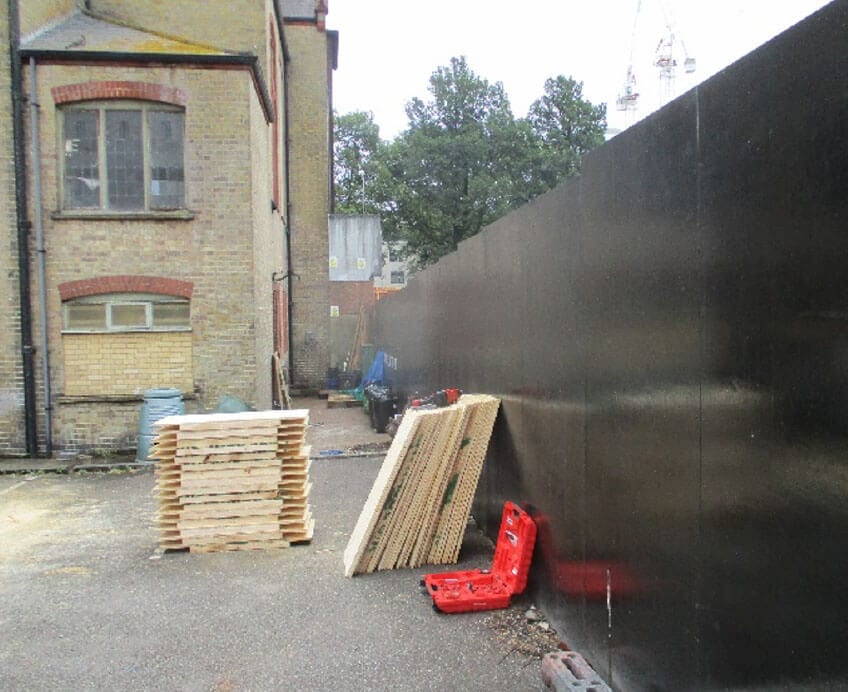 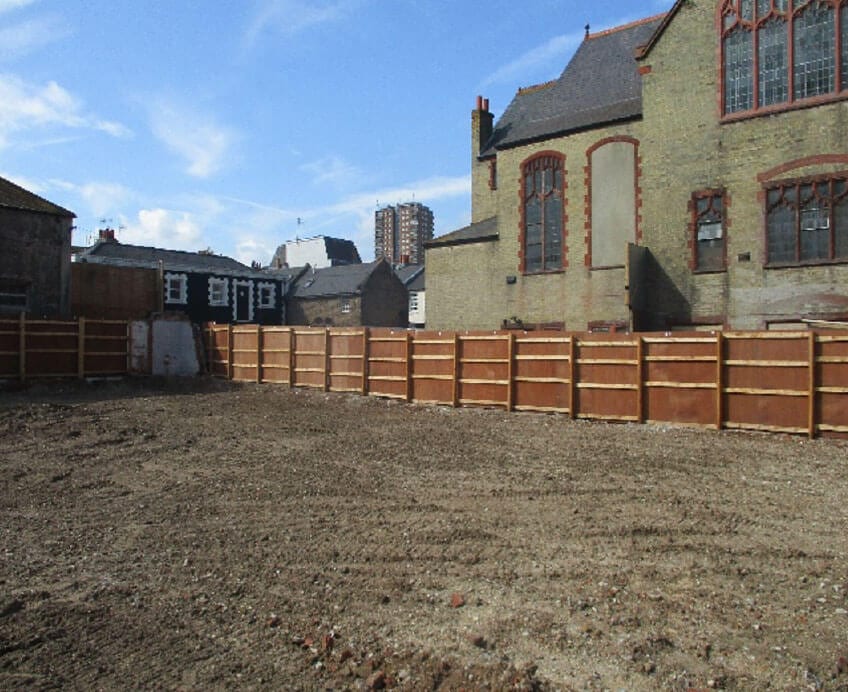 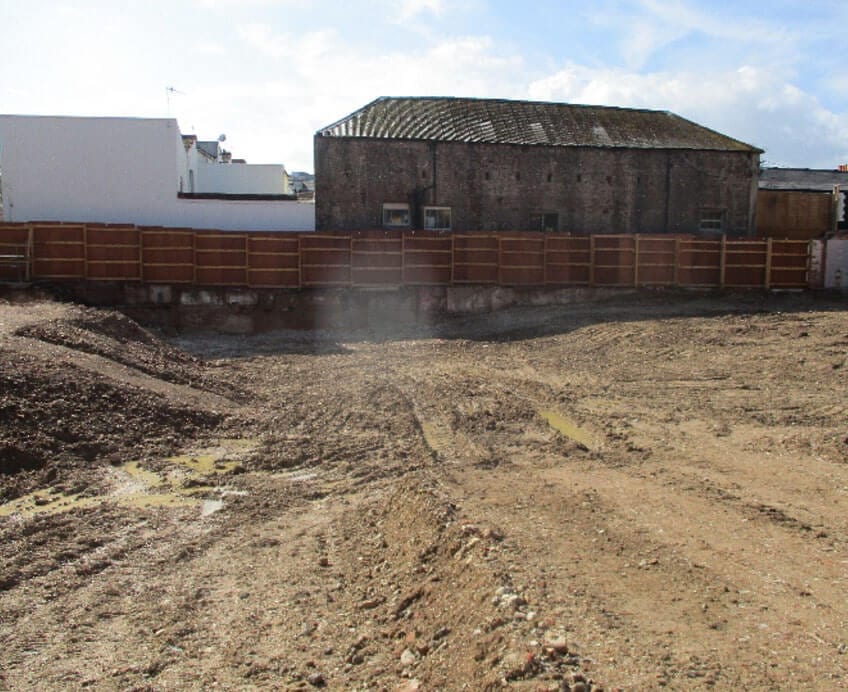 Since handover of the site, all ground works for the new build are complete. Piles were successfully sunk with no obstructions encountered.